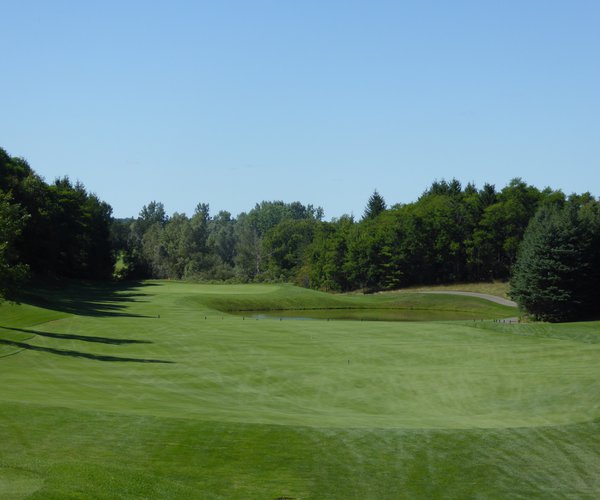 TPC Toronto at Osprey Valley is home to three wonderfully contrasting 18-hole championship layouts: the links-style Heathlands course, the "Carolina-influenced" Hoot and the more parkland oriented North course. The Heathlands is generally the highest ranked, and is kept good company by the also well-rated and pleasantly testing Hoot and North layouts. All three courses include their fair share of superbly stylish holes.

The North course at TPC Toronto (formerly called the Toot course) is a tree-lined and open parkland course that should not disappoint, with plenty of undulation and elevation change on both nine-hole loops. The layout offers liberally-sized landing areas on the naturally rolling fairways. While this often generous width off the tee may at first seem somewhat benevolent of designer Doug Carrick, his deep greenside bunkers and undulating putting surfaces put a premium on approaching pins from the right angles.

The opulent sized bunkering creates plenty of visual impact, not least at the short par-3 4th, with a large front bunker climbing-up towards the green above. You'll see other greens similarly perched above large swirling bunkers. At other times water is the main threat. Both the par-3 7th and 11th holes require ponds to be crossed en route to their large and undulating greens.

As with its two sister courses, there's plenty of golfing challenge in this handsome and stylish design. Usually excellent upkeep also contributes to the appeal of TPC Toronto's North course. One to include on your play list if you are in the area.

Visitors welcome on weekdays and weekends, during the golf season (April thru' Nov, weather dependent).

TPC Toronto at Osprey Valley (formerly known as the Osprey Valley Resorts) became Canada's first TPC facility in 2018. For all but its first year of its existence, Osprey Valley has been owned by brothers and real estate developers Roman and Jerry Humeniuk.

When the club opened in 1992, it had only one course, the links-style Heathlands. Less than a year later financial difficulties forced the original owner to sell to the Humeniuks, who operated the club as a family concern. In 2001 they added the Hoot and North (formerly Toot) courses.

The origins of the deal with the Tournament Players Club (TPC) was a by-product of Golf Canada’s search for courses in the Greater Toronto Area that would be willing and able to host future Canadian Open Championships.