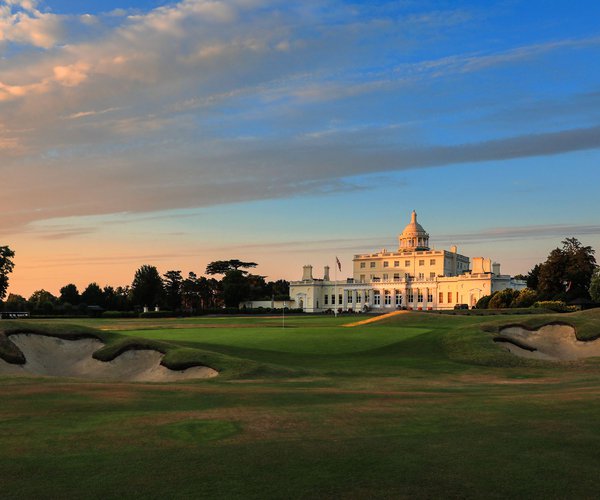 Above distances are for the Colt-Alison combination. The Lane Jackson nine, at 3089 yards from back tees, is slightly shorter than the other two nines.

Leave the M4 motorway at exit 6. Follow the A355 north towards Beaconsfield. After 2.5 miles turn right at double-roundabout onto B416 (Park Road). Stoke Park entrance is 1.2 miles on your right.

Stoke Park Country Club, Spa & Hotel: This Harry Colt design is laid out in the sumptuous and historic setting of Stoke Park. The 27-hole course encircles an iconic, domed mansion house, which provides a splendid backdrop to proceedings and serves very handsomely as the clubhouse. Also onsite is a 5-star luxury hotel and spa, making this one of London's top out-of-town Stay&Play venues.

Quintessentially English parkland in character, the partly open and partly wooded course will test all facets of your game. Of the three-nines, all dating back to 1908, the Colt-Alison nines form the best combination. The Lane Jackson loop, which lay dormant for over 55 years until all nine holes reopened in 1998, is also well worth playing. Generous fairways and flattish terrain should help your scoring, although ample (but not overly deep) bunkering and occasional water hazards need to be reckoned with.

Stoke Park was transformed in the early 1900s from a stately home into the ultimate British country club - a concept that lives on today. The club has hosted many prestigious golf tournaments, but none more famous than James Bond’s golfing duel with arch-villain Goldfinger.

Pick of the holes: take particular note of the par-3 7th on the Colt course. It is credited with inspiring one of the world’s most famous par-3s, the 12th at Augusta National, a hole designed by Alister MacKenzie (Colt's partner) and the centre of Augusta's "Amen Corner."

For most of its existence Stoke Park has been a private estate, visited by VIPs and dignitaries throughout its 1,000-year history. Over 100 years ago it was transformed through the vision of Nick "Pa" Lane Jackson into a luxury country club, the likes of which had not been seen in Britain. The Club’s "Corinthian" ethos was dedicated to creating an environment that supported the physical and psychological well-being of its members and guests, a tradition upheld to this day.

Stoke Park has always had a close relationship with nearby Pinewood Studios and the British film industry. Two James Bond movies, Goldfinger (1964) and Tomorrow Never Dies (1997) featured scenes filmed at Stoke Park. The epic duel between James Bond (Sean Connery) and Goldfinger (Gert Frobe) is still considered one of the most famous golf matches in cinematic history.