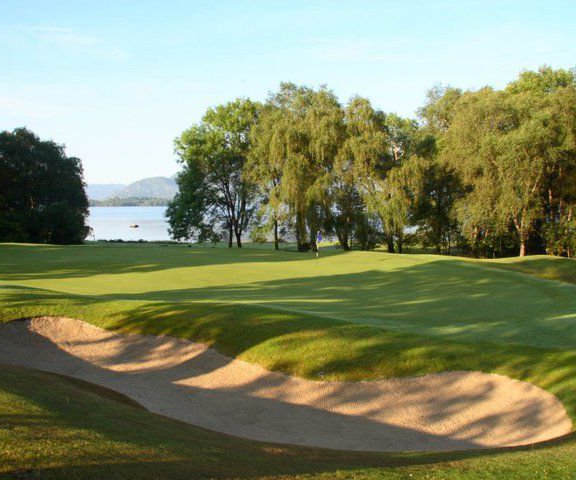 From centre of Killarney follow the N72 direction Killorglin. After 2.5 km (immediately after the entrance of Killarney Golf & Fishing Club on the left) turn right for the Lackabane course.

Killarney Golf & Fishing Club (Lackabane Course): Originally an 18-holer, the third of KG&FC's championship golf courses was relaunched in 2016 as a nine-hole layout. Its two 18-hole siblings (the Killeen and Mahony's Point courses) are both located on the south side of the N72 Killarney-Killorglin road; the Lackabane is just on the north side.

The Lackabane exudes a quite different character, first making use of open parkland, then running through a picturesque valley before arriving in open and linksy terrain, where the majority of holes are located. Deep rough, gorse bushes, a small lake and babbling brook all add to the variety of hazards and difficulties expertly incorporated by designer Donald Steel.

The English course architect was not however responsible for the old ruin that occupies a position just after the 7th green. Although the Lackabane is clearly now third in line of the Killarney G&FC trio, it remains a challenging and enjoyable layout, albeit just nine holes.

In its days as an 18-hole layout, the Lackabane course at Killarney Golf & Fishing Club hosted the Ladies Irish Open in 2002. The Club's Killeen course has been the venue for several top level golf championships, not least the Irish Open on several occasions. The Killeen was also the venue for the Curtis Cup in 1996, when Great Britain & Ireland's top women amateur golfers prevailed over the USA team, by a score of 11.5 points to 6.5.