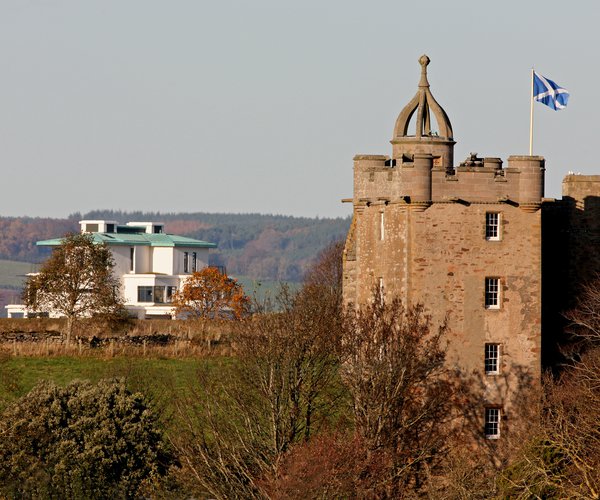 From Inverness follow the A96 east, direction Nairn. After 4 miles turn left onto the B9039, direction Castle Stuart. After 1.5 mls golf entrance is on your left.

Castle Stuart Golf Links has given the Scottish Highlands another world-class coastal treasure, joining an impressive list of golf courses that includes the likes of Royal Dornoch, Nairn and the private Skibo Castle. Just a stone's throw from the infamous battlefield of Culloden, Castle Stuart commands spectacular views from all its wonderfully crafted holes.

Whether at the sea's edge, as on the first three holes of each nine-hole loop, or up on the course's higher elevations, the views here are stunning beyond compare. The ever-present spectacular vistas take in the Moray Firth, Chanonry Peninsula (and lighthouse), Black Isle, Highland mountain ranges and the Kessock Bridge, which crosses the Beauly Firth at Inverness. As you play round Castle Stuart you are never without a spectacular view to admire.

The layout itself combines the smooth lines of a modern-day design with the rugged character and features of a much older layout. Several "infinity" greens provide spectacular tee and approach shots, with the Firth, the mountains or Castle Stuart itself providing scenic backdrops to several greens. "Ease of play" considerations and the layout's exposed position directly alongside the Firth, encouraged designers Mark Parsinen and Gil Hanse to incorporate wide fairways into the layout. Some of the fairways are so generous, you'd be seriously embarrassed to miss them.

Large and extravagantly undulating greens are matched by the exuberance of some of the bunkering. A mix of revetted pot bunkers and more expansive rustic bunkering reaches epic proportions with an elaborate sand hazard separating the long par-4 5th and par-5 6th fairways. There's also a dramatic sand cliff flanking the tee-boxes of the fabulous par-4 13th. Castle Stuart is as scenic as any golf course in Scotland, and right up there with the best. This might explain the fairly hefty green fee, making it one of the most expensive courses to play among its esteemed Highland peers!

Visitors welcome on weekdays and weekends during golf season (April thru' mid-Nov).

Castle Stuart is a walking-only course; golf carts are not available. Caddies available if pre-booked.

The construction of the Castle Stuart (the castle) was started by Mary Queen of Scots' half-brother, James Stuart, the 1st Earl of Moray. He was unfortunately murdered, as was the 2nd Earl, so the castle was eventually finished in 1625 by James Stuart, 3rd Earl of Moray. The castle fell into decline later in the 1600s, and for 300 years remained a derelict ruin. Its wonderful recent restoration is the inspiration of two current day members of this noble Scottish lineage, Charles and Elizabeth Stuart.

Castle Stuart Golf Links opened for play in July 2009, and now offers its own onsite accommodation. The original Castle Stuart, which is adjacent to the golf course, offers 8 historic guest-rooms.