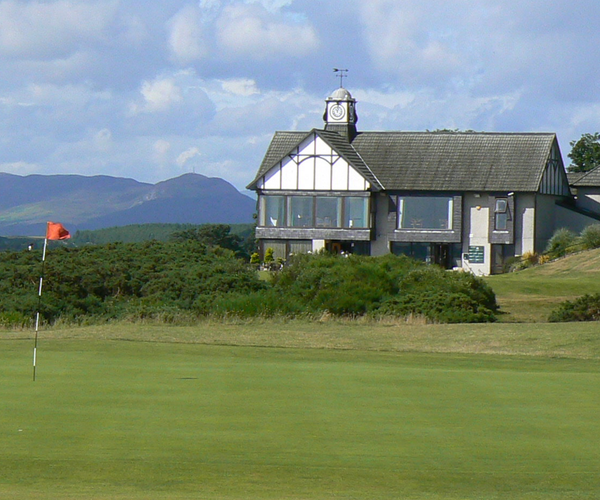 From the A9, 3 mi north of Dornoch Firth Bridge, turn right onto the A949 direction Dornoch. After 1.9 mi turn right direction Beach/Hotel. After 200 yds turn left into Golf Rd. After 300 yds golf car park is on your left.

Royal Dornoch Golf Club: For four hundred years (it is said) Dornoch has been weaving its spell on all who come to play on these majestic and humbling links. The Championship layout (versus the shorter Struie course) is understandably regarded as one of the world's finest golf courses. In a gloriously timeless setting, you will enjoy stunning sea views onto Dornoch Firth from all parts of this wonderfully natural course.

Dornoch's classic out-and-back layout, is attended by excellent revetted bunkering, abundant gorse bushes and well-defended elevated greens. Here you have all the ingredients for a truly memorable round ... golfing nirvana, especially if the weather is in cooperative mood. Much of the time the good-width fairways stretch out before you, with any trouble (... bunkers, bushes and the Bay) all clear to see from the tee. On a couple of occasions blind drives are needed, while the closing stretch of four holes demands good course management and a wee bit of local knowledge.

In late-spring and early-summer the course is ablaze with the bright yellow flowering gorse, amplifying the year-round picture perfect scenery. Royal Dornoch provides fond and lasting memories to virtually all who play here. Few other courses are its equal in this regard.

Visitors welcome on weekdays, Sundays and Saturdays (after 2pm).

Must book in advance. Proof of handicap may be required.

There is clear documentary evidence that golf was played in Dornoch as long ago as the early 1600s, although a 9-hole golf club was not established until 1877. Donald Ross, at one time the professional and green-keeper at Dornoch, incorporated many of the layout's features into courses he later designed in the USA, among them Pinehurst's legendary No.2 course.