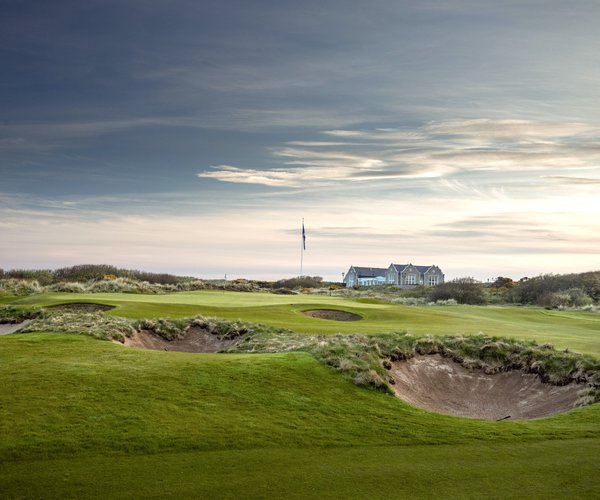 Trump Aberdeen is home to one of the finest seaside links golf courses in the British Isles. Laid out behind Balmedie Beach on the Menie Estate, this relatively new addition to the panoply of great links layouts in Scotland contains a wealth of wonderfully crafted, memorable and challenging holes. The course occupies an area of huge coastal sand hills, as big as you'll find on any golf course in Britain, and rebranded by Trump as the "Great Dunes of Scotland".

Martin Hawtree's design is based on two nine-hole loops that weave through the dunes on either side of the functional rather than opulent clubhouse. There's plenty of undulation and elevation change along the way. Several tee-boxes, fairways and greens rise-up to provide views onto the North Sea, as well as far inland over the rich and rolling Aberdeenshire farmland. Other parts of the course plunge into sheltered valleys. Close-mown fairways and fast-paced greens are liberally dotted with revetted pot bunkers, and always back-dropped by the pale green, marram-grass covered dunes.

The creation of a golf course on these centuries old sand hills was not without some local controversy, further compounded by the addition of a few wind turbines just offshore. However, the resulting layout, ruggedly handsome rather than winsomely beautiful, has been widely acknowledged in the golfing world as a stunning addition to the links courses of the British Isles. Definitely worth going out of your way to play.

Pick of the holes: Almost a case of take your pick from any of the 18, but in terms of North Sea and coastal views, they don't come any better than those from the back tees of the par-4 14th hole and long par-5 18th.

Visitors welcome on weekdays and weekends during the golf season (March thru' Nov).

Soft spikes only. This is a walking course. Golf carts available for hire only with a valid medical certificate. Caddies available (book in advance).

Donald Trump's connection to Scotland goes back to his mother, Mary Anne MacLeod, who was born on the Isle of Lewis (Outer Hebrides), off the west coast of Scotland. His grandfather, Frederick Trump (born Friedrich Trumpf), emigrated to the United States in 1885 and became a naturalised American in 1892.