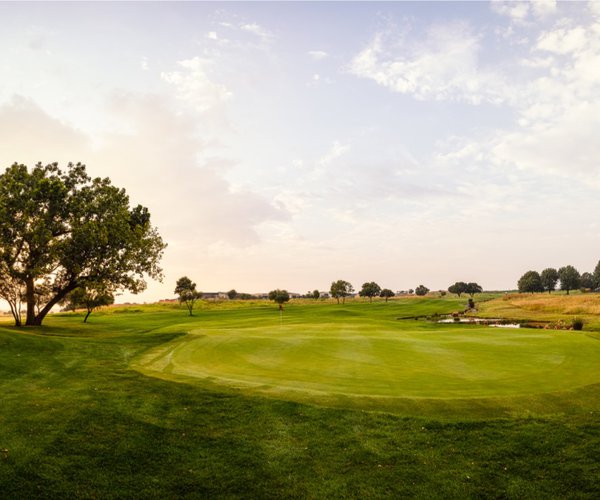 Above distances are for the Masai Mara course. Also at Serengeti is the 9-hole Whistling Thorn course.

35 km E of Sandton (Sandton is a northern Johannesburg suburb).

To the east of Johannesburg and Sandton, follow Hwy R21, and take the R25 Bronkhorstpruit exit. Head east along the R25, direction Bronkhorstpruit. After 900 metres you will see signage to the golf course on your right.

Serengeti Golf & Wildlife Estate is a new city located just east of Johannesburg, which provides a self-contained and secure residential environment, with everything needed contained inside its perimeter. Among the facilities is the first 27-hole Jack Nicklaus Signature course in South Africa's Gauteng province. The 18-hole championship layout, named Masai Mara, has a rugged grassland and dune scape look. In addition, the 9-hole Whistling Thorn course features classic design elements and a plains-style feel. The Serengeti Golf Club is the first in Gauteng to use cool season grasses, allowing the playing areas to remain lush and green throughout the year. The two-nine hole loops of the Masai Mara layout incorporate a number of challenging features, such as the challenging par-5 8th hole, played to an island-green. Water also threatens on other holes, with ponds and small lakes dangerously flanking several fairways. A majority of the holes have an open and natural feel; where housing occasionally flanks the holes, it is generally set well back out of harm's way. The variety of available tee options can provide the sternest of challenges for the most skilled players, or an easier-going round for newer golfers.
List of courses: Around Johannesburg

Serengeti takes its name from a geographical region of eastern Africa, located in north Tanzania and south-western Kenya. The region, once known as Massailand, contains several national parks and game reserves, and covers an area of 30,000 km2 (12,000 sq mi). Meaning "endless plains" in the Maasai language, the Serengeti is host to the world's largest animal migration, when over two million wildebeests, zebras and other grazing herbivores, migrate from the northern hills toward the southern plains, crossing the Mara River, in pursuit of the rains. | There are currently five other Jack Nicklaus Signature courses in South Africa: Pecanwood (Northwest Province), Pearl Valley (Western Cape), Simola (Southern Cape), St Francis Links (Eastern Cape) and Houghton (Gauteng).