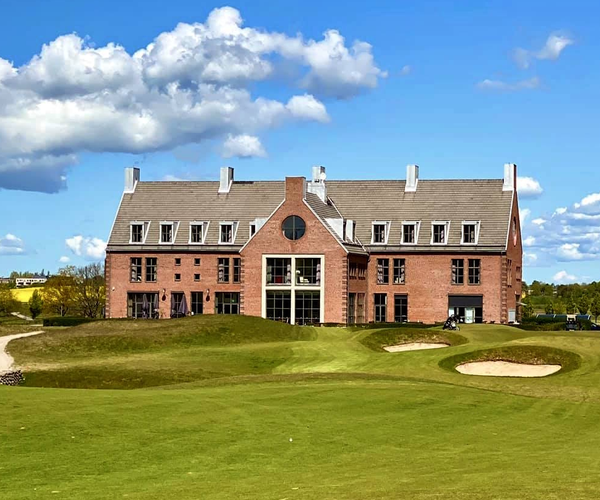 Above distances are for the Lakes course. Also at PGA Sweden National is the 18-hole Links course (par-72; 6,835 m from back tees) and 9-hole par-3 Short course, which comprises full-length par-3s of similar quality to the Links and Lakes courses; also designed by Kyle Phillips.

PGA Sweden National (Lakes course): Home to two excellent championship courses, PGA Sweden National was born out of a desire that this passionate golfing country should have a top-class golfing facility for its PGA professionals and coaches, as well as members and visitors. And so, with a nudge from a wee dram or two, the Lakes and Links courses came into being. Both were masterfully created by renowned golf course architect Kyle Phillips.

The highly-acclaimed Links course opened for play in 2009, and was followed a year later by the equally impressive Lakes course. The big-dimension Lakes layout, a European Tour venue, has a classic open parkland feel, interpreted in a Swedish way. Here the golfer meets small greens, plenty of water hazards and large threatening bunkers ... and large often does mean large.

This modern championship layout exudes a relatively open feel, as you play the two nine-hole loops out and back from the clubhouse. A large, purpose-built lake has to be carefully navigated as you play alongside it on the par-4 9th, par-3 17th and gently curving par-5 18th. A smaller lake also threatens on the inside of the left-to-right dogleg on the par-4 13th.

With 74 large stand-out bunkers also in attendance on the Lakes layout, and water ditches that wander through holes like the par-5 11th and par-4 16th, be in no doubt that your game will be rigorously tested.

Must book in advance. Maximum handicap: 36 per player and 100 per flight.

As PGA Sweden National's literature says, "it started, as great ideas often do, with a bottle of whisky ... and the idea felt just as good the day after". That idea, passionately felt by Michael Sorling, the then CEO of the Swedish PGA, was to create a special venue for Sweden's golf professionals and coaches. The original concept envisaged a complex with three 18-hole courses, which was later revised to two. Thirteen years after the whisky bottle was opened, the first course (the Links) opened for play, soon to be followed by the Lakes course.