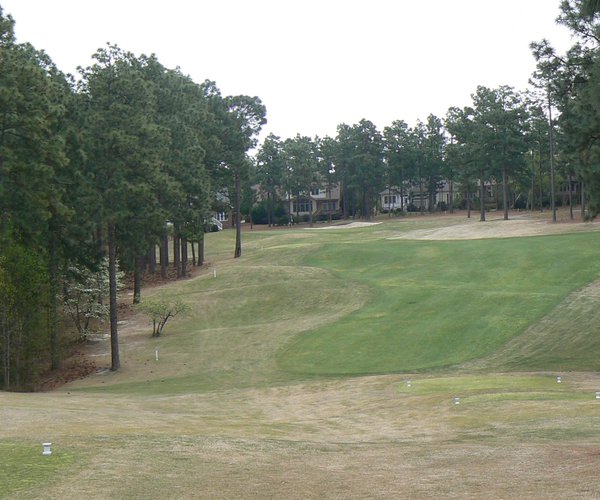 From the Pinehurst traffic circle (intersection of the US-15-501, 211 and 2) follow the 2-East (Midland Rd) direction Southern Pines. After 1.4 miles turn left into North Knoll Road. After o.5 miles enter Longleaf Golf Club.

Longleaf Golf & Country Club: The original horse racing heritage of this site is clear to see on Longleaf's relatively open front-nine. Furlong markers and stretches of railing have been left in place, although don't expect to see any thoroughbreds galloping past - golf is now the main activity conducted on this flattish terrain alongside the Midland Road.

Reasonably deep, high-lipped bunkering, and some modest earthmounding lend definition to the holes, as you canter round this generally easy-going and waterless front nine. Your putting will be tested on the large, well-paced and often undulating greens, and you'll need to be careful at the more tree-lined par-5 5th and par-4 9th, both require quite tight drives.

After your time "on the flat" on the front-nine, the golf course becomes considerably more undulating and tree-lined on the back-nine, with real estate also more in evidence, although generally set far enough back not to disturb your shot-making.

Accompanying the elevation changes, you'll also have more water hazards in play, as well as three par-3's within the space of four holes - the 12th and 13th are two testing downhill par-3's, while the 15th, if played from the tips, demands a daunting carry over a small fishing lake to reach the safety of the green. In between the par-3's is the distinctly horse-shoe shaped par-5 14th.

Longleaf may be one of Pinehurst's easier-going tracks, but its also a great place to hone your skills for some of the tougher challenges ahead.

Longleaf Golf & Country Club was built on the site of Starland Farm, a former thoroughbred horse farm. In the early 1950's, Lloyd Patrick (L.P.) Tate eloped with tobacco and textile heiress Anne Cannon Reynolds. The newly Mrs. Tate purchased 457 acres of the James Barber Estate on which they built and operated a horse training center and racetrack. L.P. called it Starland Farm, as he liked to think of all his horses as stars. The entrance with its stone pillars and a Starland Farm sign was located just behind the #2 tee box on Longleaf's golf course.