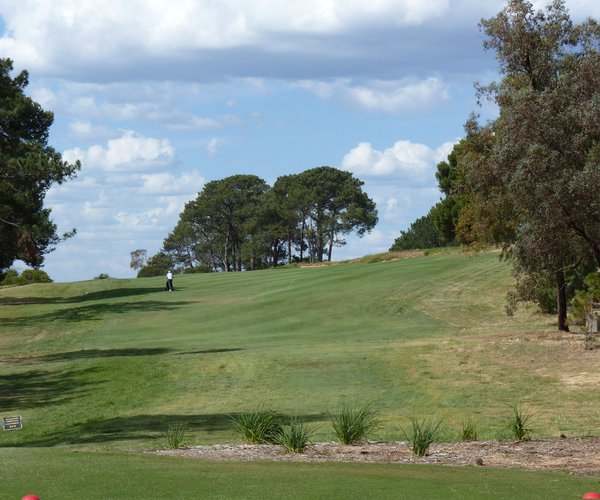 Glenelg Golf Club: The palindromic Glenelg is located just south of Adelaide Airport, but relatively undisturbed by air traffic (which doesn't land or take-off directly overhead) - like Adelaide's other top courses, the layout sits on sandy subsoil, ensuring plenty of distinctly links-like characteristics, not least firm, fast-running fairways and stylish, seemingly ever-threatening bunkering - the closer to the mid-sized, undulating greens you get, the greater the bunker defences become - sand is not alone in giving definition to the holes; a pleasant array of pine trees and good mounding is also present - the course maintains a nicely undulating flow, and although not bestowed with pronounced elevation changes, does provide some views out onto the Adelaide Hills to the east of the city - several doglegs join the straightaway holes, requiring a variety of shot-making from the tee - one or two slightly weaker looking holes are also in the mix along with the majority, which are well crafted, attractive, challenging golf holes - occasional water hazards may take you by surprise, so particular attention needs to be paid at the par-4 1st, par-5 5th and par-4 8th on the front-nine and the closing threesome on the back-nine - although located in an Adelaide suburb, housing does not intrude within or even directly alongside the course perimeter, allowing you to enjoy Glenelg's spacious and relatively open parkland environment.
List of courses: Around Adelaide

Visitors welcome on weekdays and Sundays.

Non-metal spike facility. Walking permitted at all times. Golf carts available for hire (although walking is the norm).

Glenelg Golf Club is located in the Glenelg suburb of Adelaide. The original village of Glenelg is located in the Highland region of Scotland, by the Kyle Rhea narrows, where the Isle of Skye comes closest to the Scottish mainland. It was here that cattle reared on Skye were routinely made to swim the 600 metre narrows to reach the mainland before being herded to market along the drovers' road to Kinlochhourn and on to the Lowlands. A person from Glenelg is known in Gaelic as an Eilgeach.