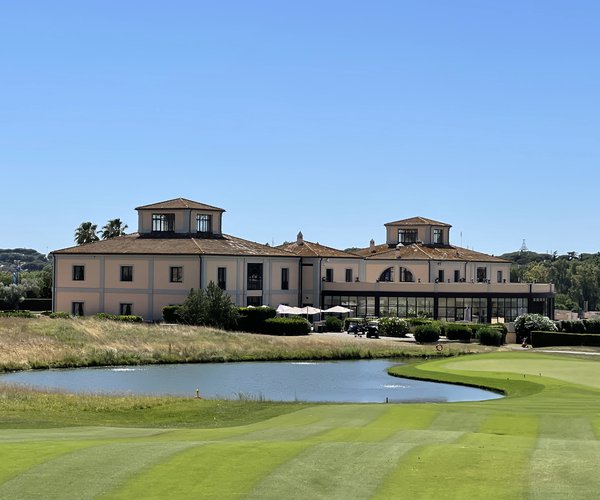 From Rome's ring road (the Grande Raccordo Anulare-GRA), in the northeast of Rome, take exit 12 (Centrale del Latte), and head east (away from Rome). After 3.5 km at roundabout turn right onto the SP23a, towards Palombara. After 1.3 km at roundabout, turn right into Via di Marco Simone. After o.7 km golf entrance is on your left.

Marco Simone Golf & Country Club: With a clubhouse that might befit a Roman Emperor, and a golf course to match, you can be sure of a memorable outing at Rome's most talked about golf facility. Located in the city's eastern outskirts in the grounds of an 11th century castle, Jim Fazio's original layout was much changed to create a modern Ryder Cup course ... now one of the Eternal City's (and Italy's) most revered.

This handsome, big-dimension, challenging course occupies the flowing contours of pleasantly undulating (at times hilly) parkland terrain. Excellent definition is given to the driving lines by large stylish bunkers, which are liberally included amongst the substantial "stadium-like" mounding.

On this predominantly open and ever-undulating design, a scattering of ponds and water ditches complement the stylish bunkering, all in service of the layout's memorable variety of holes. The typically large, subtly sloping and fast greens, are often guarded by sizable bunkers and relatively steep run-off areas. From the course you will enjoy occasional vistas across the city of Rome to the west, while to the east lies a rural idyll of rolling hills and scattered villages.

Pick of the holes: after climbing away from the clubhouse at the par-4 10th and 11th holes, you arrive at the highest and most scenic part of the layout. Up here you'll also find the mischievous short par-3 13th, with its deserted villa and mountain backdrop, and distant view of the hill-top town of Montecelio.

Stay&Play at Marco Simone: Onsite apartments and residences are available to rent within the Marco Simone complex.

Visitors welcome on weekdays (closed on Tuesdays) and weekends. More restricted at weekends.

Must book in advance. Maximum handicap: 34.

Marco Simone is owned by Laura Biagiotti, one of Italy’s greatest fashion designers. Once dubbed the "Queen of Cashmere," she continues, with her daughter, to direct one of the largest fashion houses in Italy - the House of Biagiotti.

Since 1980 Biagiotti has lived in the 11th century castle (Castello di Marco Simone) that you see from various parts of the golf course. The castle was lovingly restored to its ancient splendour by Biagiotti and her husband Gianni Cigna, who passed away prematurely in August 1996. The castle and golf club, share their name with, but are not related to Marco Simone, a famous former Italian professional football player.

Marco Simone has hosted many top level tournaments, including the Italian Open Championship on multiple occasions. Most prestigiously, it will host the 44th Ryder Cup matches in September 2023. For more details see Top Golf Tournaments at Marco Simone.