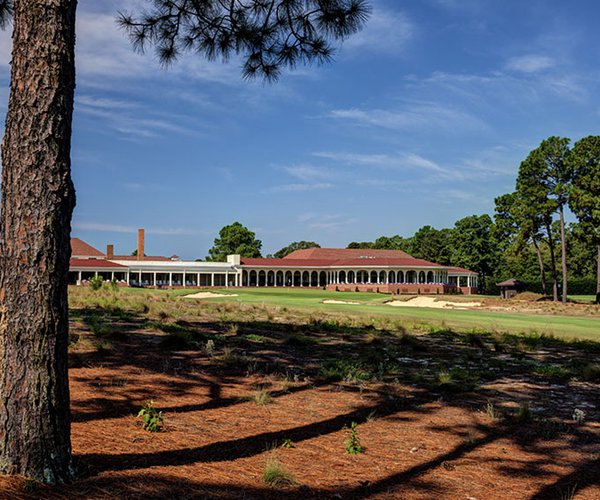 From the Pinehurst traffic circle (intersection of the US-15-501, 211 and 2) follow the 2-West direction Pinehurst. After 1.3 miles turn left into Carolina Vista Drive. After 300 yards parking is on your right (bag drop straight ahead).

Pinehurst No.2 Golf Course is the most famous of all the Pinehurst courses, revered the world over, and understandably so. Designed by the legendary Donald Ross, "No.2" opened in 1907. Ross, who was born in Dornoch in Scotland, regarded the course as “the fairest test of championship golf I have ever designed.” He was associated with the course for nearly a half-century, living in a brick built house next to the third green and continually improving the course until his death in 1948.

Talk to anyone who has played this Donald Ross masterpiece, and they may not recall the wonderfully understated design, the immaculate upkeep, absence of water hazards and out-of-bounds, or the mature pine trees that beautifully define the holes. They may even forget to mention the relatively flat good-width fairways, or the hard-pan sandy waste areas that line them (the waste areas are liberally dotted with clumps of wire-grass, as tough to play out of as thick Scottish heather). However, what most remember, perhaps with shot-by-shot clarity, are the adventures they had in and around the greens.

Call them what you will .... turtle-backs, inverted saucers or upturned pudding bowls. Pinehurst No.2 has some of the most difficult crowned greens that you'll find in golf. Slick run-off areas around these domed putting surfaces simply serve to magnify your troubles. If any part of your game needs to be completely on song to score well on No.2, it's your chipping and putting. Your bunker play will also need to be top draw. Getting into the many deep steep-faced bunkers that fiercely protect the greens is easy; much harder to get out of them.

Without doubt Pinehurst No.2 is one of the most celebrated of the world's major championship courses. But whether you regard it as a fair test of golf, or a cruel one, may largely depend on the strength of your short game on and around the greens.

Stay&Play at Pinehurst: three historic Pinehurst Resort hotels (Carolina Hotel, Holly Inn and Manor Inn) are located o.5 mi from the golf clubhouse, from which courses No.1, 2, 3, 4 & 5 radiate out (see Where2Stay section below).

Must book in advance. Non-resort guests can only book 1-day ahead.

Non-metal spike facility. Walking permitted if accompanied by a caddie. Caddies available at all times and generally used by visiting players. Golf carts must remain on the cart path. On a first outing here, it's best to take a caddie - difficult to read the greens without one.

Overlooking the 18th green on the No.2 course is Pinehurst's Walk of Fame, with statues honouring Payne Stewart, Richard Tufts (grandson of Pinehurst's founder James W. Tufts), Donald Ross and Robert Dedman (whose Dallas-based Club Corporation of America, revived Pinehurst in the 1980's). Pinehurst Resort's clubhouse is also a great place to spend some time. Strolling its impressive corridors provides the opportunity to review many showcases of memorabilia from U.S. Opens and other top level championships that have been played here. The brick built house to the left of the third green on the No.2 course is the former home of Donald Ross.

Pinehurst No.2's Roll of Honour includes many distinguished legends of the game. Ben Hogan won his first professional tournament here (1940 North & South Open), which convinced him to remain a touring professional. Jack Nicklaus and Curtis Strange both won here as amateurs (North & South Men's Amateur). Perhaps the images most strongly etched in golfers' minds are those associated with Payne Stewart winning the US Open here in 1999. In 2005 Michael Campbell won that same title on the No.2 course; in 2014 it was Martin Kaymer's turn. The U.S. Women's Open was also played here in 2014, Michelle Wie collecting her first victory in a major championship. For more details see Major Golf Tournaments at Pinehurst No.2 golf course.