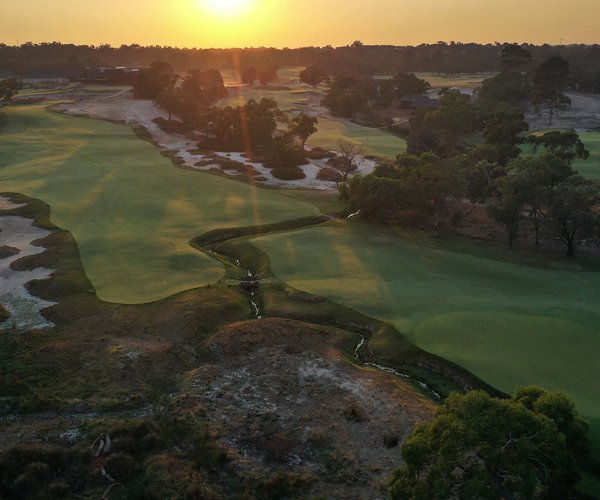 Above distances are for the South course. Also at PKCGC is the 18-hole North course (par-72, 6124 mtrs from back tees).

From the centre of Melbourne travel south-east on the Nepean Highway (Hwy 3). After approx 27 km, in Edithvale, turn left into Edithvale Road. After 2.7 km turn right onto the Mornington Peninsula Freeway (Hwy 11). After 12 km turn off Hwy 11 (Frankston North) and take Skye Road (not the Frankston-Dandenong Rd) heading east. After 2 km golf entrance is on your left.

The South course is the longer of the two layouts at PKCGC, and was traditionally known as the club's championship course ( ... before the major renovation of its sibling in 2016). Although not as dramatic nor as undulating as its sibling, and some would say not as handsome nor as well-groomed ... the South should not be overlooked.

Although flatter in the beginning, the South's more generous tree-lined fairways, good quality bunkering and large sloping greens combine to produce another excellent test for your golfing skills. Roaming across a natural and expansive environment, the layout becomes more undulating on the arguably better back-nine.

When playing Peninsula South, be prepared to have every part of your game tested. And like the usually higher-rated North course, carding a good score becomes an ever greater challenge when the wind blows.

Peninsula Kingswood is a private club. Visitor play is restricted to house guests on Stay&Play packages. Overseas and reciprocal visitors, should contact the Operations Mgr to determine playing possibilities.

The Peninsula CGC takes its name from the Mornington Peninsula, which stretches away to the south. The club started life in 1922 as the Tower Golf House Company, a residential golf and country club for men and women, located in a country setting well outside the rapidly urbanising sprawl of Melbourne. A picture of the splendid Tower House (now replaced by a more modern clubhouse) hangs in the lounge of the clubhouse.