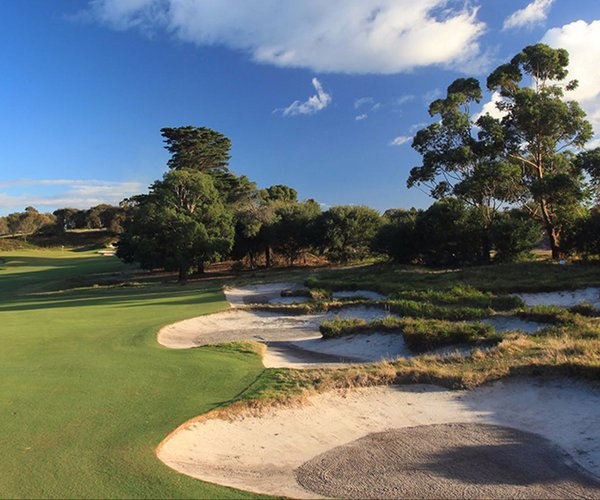 Above distances are for the East course. Also at Royal Melbourne Golf Club is the 18-hole West course (par-72; 6023 mtrs from back tees).

Royal Melbourne Golf Club (East course): Black Rock is one of Melbourne's fashionable south-eastern suburbs, and provides an ideal environment for RMCG's two outstanding championship courses. Like the world renowned West course at Royal Melbourne, the East also occupies undulating terrain, and is laid out on an easy draining sandy base.

Royal Melbourne's East course comprises gently undulating holes, superb fast-running fairways, excellent bunkering and large lightning fast greens. This is a big, rangy layout that takes you on an eastward out-and-back journey from the clubhouse, crossing two roads in the process. The road crossing is barely noticed and does not interrupt the flow of the course.

This wonderful collection of sandbelt golf holes are lined with a variety of bushes, shrubs and smallish trees, with some larger trees occasionally making their presence felt. Notable amongst the challenges you'll face are three very good short par-4s and an excellent collection of par-3 holes. Accurate approach play is needed to avoid the substantive and ever-present bunkering and reach the safety of the excellent putting surfaces.

Both RMGC's East and West courses are amongst the highest rated of the "heathland" layouts on the Melbourne sandbelt, and amongst the very best courses in Australia. A much asked question is which is the better layout, East or West? Not even the members seem to be able to agree on that one.

Maximum handicap: men 36; women 45. Introduction letter from home club required. Only one of the two courses can be played on the same day.

This is a walking course. Golf carts can be booked in advance (medical certificate required). Caddies available (if pre-booked).

Look out for the plaque at the first tee. It commemorates the spot where the Club's founders looked out across the surrounding area in 1898, deciding this would be an ideal site for the relocation of Royal Melbourne from its original Caulfield links home.

Royal Melbourne is one of eight golf clubs in Australia honoured by exercise of the Sovereign's royal prerogative. Queen Victoria conferred the Royal title on the club in 1895. The eight Australian 'Royals' are (in order of gaining Royal status): Melbourne, Sydney, Queensland, Adelaide, Hobart, Fremantle, Canberra and Perth.