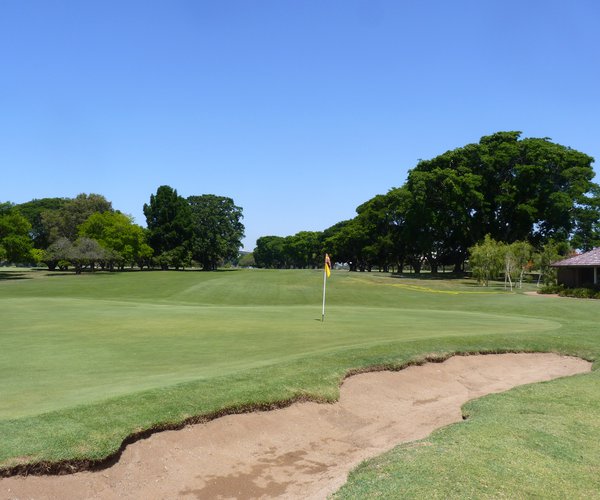 Royal Queensland Golf Club is home to a championship golf course that ranks with some of the best in Australia. This open parkland layout provides a wonderful test for your all-round game, with many attractive, skilfully crafted and challenging holes to enjoy. A must play if you are in the area.

Royal Queensland is a private club. Outside visitors (must be golf club members with an official handicap) can contact the Golf Service Centre to establish playing possibilities. Visitor tee-times generally available on Mon, Tues (pm), Thur (pm) and Fri.

Unusually, each flagstick at Royal Queensland carries not one but two flags. The top flag (yellow cross on a red background) is the international maritime signal flag for the letter "R". Directly underneath it, the plain yellow flag denotes "Q". | Many of the trees at Royal Queensland are very helpfully labelled, allowing you to get to recognise: jacaranda, banksia, coral trees, poinciana, ficus (fig); cypress, cottonwood, sirus, tulipwood, bottle trees, pongamia, hoop pine, kauri, mahogany, tea trees, leopard trees, brazilian tree ferns and many, many more. | Royal Queensland is one of eight golf clubs in Australia honoured by exercise of the Sovereign's royal prerogative. George V conferred the Royal title on the club in 1921. The eight Australian 'Royals' are (in order of gaining Royal status): Melbourne, Sydney, Queensland, Adelaide, Hobart, Fremantle, Canberra and Perth.