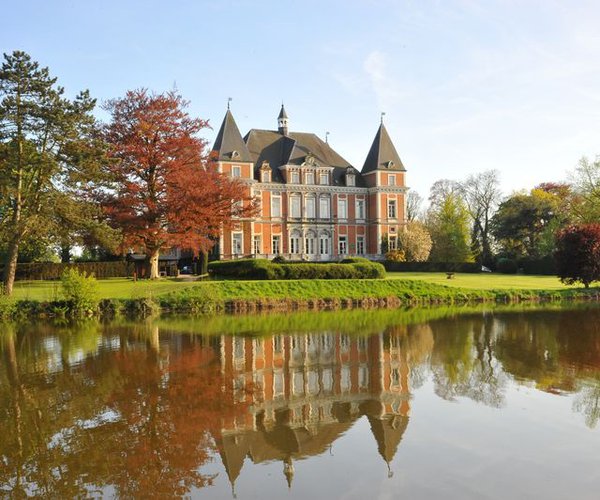 Approx 6 km to the south-west of Gent, leave the A14 (E17) Gent - Kortrijk motorway at exit 8 and follow the N60 direction Oudenaarde. After 16 km leave the N60 and take the N453 direction Petergem. After 3.4 km (passing through Petergem) golf is on your left (indicated on a small green board).

Golf & Country Club Oudenaarde (Kasteel course): Laid out in the grounds of Petegem Castle (a very handsome stately pile), there are now two 18-hole courses at Oudenaarde, the Kasteel (Castle) and the Anker (Anchor). The shorter Kasteel course utilises holes from the former Adbij (A), Anker (B) and Burcht (C) nines, and also includes two new holes. As before, the layout will test every facet of your game - not least your ability to hit the ball straight and true. Mature trees and garden-like bushes line most of the fairways, often quite tightly. OB, water ditches and small lakes also play their part in keeping you straight and honest on a layout that is at times flat, at others gently undulating. Wayward power-hitting is not the key to unlocking a good score on this pleasant parkland layout. If you think there is sanctuary to be found once you reach the putting surfaces, then think again.

The generally fast and excellently maintained greens, are sufficiently fast and sloping to test the nerve of even the best of putters. The course contains its fair share of strong holes and others of a "trickier" nature, with an even spread of tight drives, "water-bounded" par-3's and dog-legging longer holes. Don't be surprised to hear chimes from the chateau's bell-tower ringing out at regular intervals (perhaps a pace of play reminder !).

The stately home of Petegem Castle, dating from 1847, incorporates the clubhouse - one of the more impressive 19th holes in Belgium, and probably the only one where the bell tower still rings out its melodious chimes.