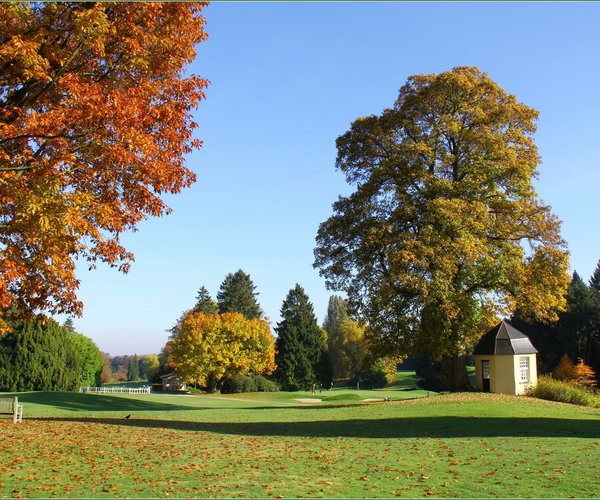 From the east side of the Brussels ring, leave at exit 1 (N3 Brussels / Tervuren). At traffic lights take the N3 direction Tervuren / Leuven. After o.5 km turn right into golf (look out for small "Ravenstein" sign on your right).

This is a layout that exudes all the hallmarks of an aristocratic past, where Belgian kings have expertly played the game over many decades. The stunning clubhouse is just one of Ravenstein's many attractive features. Although not an overly long layout, several holes demand an accurate, well-placed tee-shot rather than something of booming length. Among many excellent holes, the uphill par-3 3rd and the dauntingly tight par-4 11th are both worthy of a special mention.

Without doubt this is the most difficult golf club in Belgium to join; to even think of putting your name down, your connections had better be aristocratic or diplomatic (at the most elevated levels). But thankfully, there is the opportunity to pay a green fee at certain times, and enjoy the hallowed greens and fairways of this most royal of clubs.

Visitors welcome on weekdays; no visitors on weekends. Closed Mondays.

Must book in advance. Maximum handicap on the Old course: men 20, women 24. Proof of handicap must be shown.

Players generally walk this course. Electric push-trolleys are available for hire, but golf carts are not available.

The Château de Ravenstein, first owned by Philippe de Cleves (Squire of Ravenstein), now serves as the clubhouse - one of the most beautiful in Europe, The manor farm has a history that stretches back to 1460. The first stone of the present Château was laid in 1748 by Charles-Henry Francolet de Terweynt. After several changes of ownership the property was bought from the Belgian State in 1880 by Leopold II who presented it to the "Royal Donation" in 1903, so that it could become the clubhouse for the projected golf course.