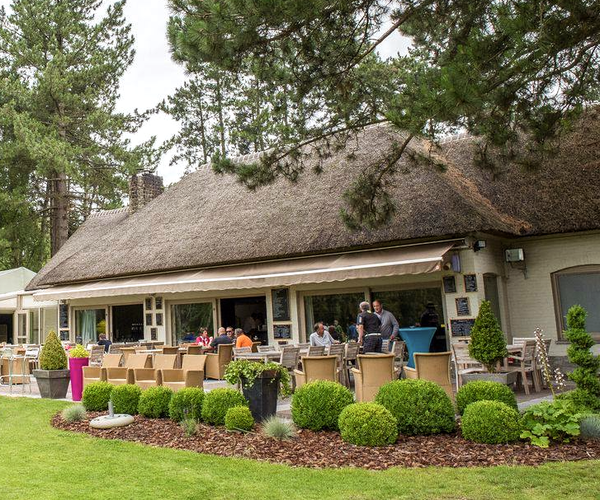 Above distances are for the Bruyères-Etangs combination. The Quesnoy-nine, at 2897 m from the back tees, is slightly shorter than the other two nines. Royal Hainaut also has a nine-hole Pitch & Putt course.

Heading south on the A7-E19-E42 motorway just north of Mons, take exit 23 bis* (N6 / Ath) and follow direction Ath. (*Use exit 23 if heading north on the A7). After o.5 km at traffic lights turn right onto the N56 direction Ath. After 3 km turn left at sign for Royal Hainaut Golf

Accuracy versus length is usually the key to scoring well at Royal Hainaut, where the key challenges are keeping the ball out of the trees and traps, and trying to get down in two on the large and often fast greens. The wooded heathland terrain is gently undulating, but not overly so.

Nine extra holes, "Les Etangs", were added in 1990, with these holes also weaving their way through some tranquil areas of mature pine forest, and also demanding accurate driving from the tee. The newer nine, with more pronounced undulations on its opening holes, fits well with the original 18, giving Royal Hainaut a wonderfully interchangeable set of three 9-hole loops.

Tom Simpson, designer of Bruyeres and Quesnoy ("B&Q"), played a major role in the early development of golf in Belgium, designing many of the older generation of "Royal" courses. Also involved at Royal Hainaut, and also key developers of golf courses in Belgium are Fred Hawtree and his son Martin.