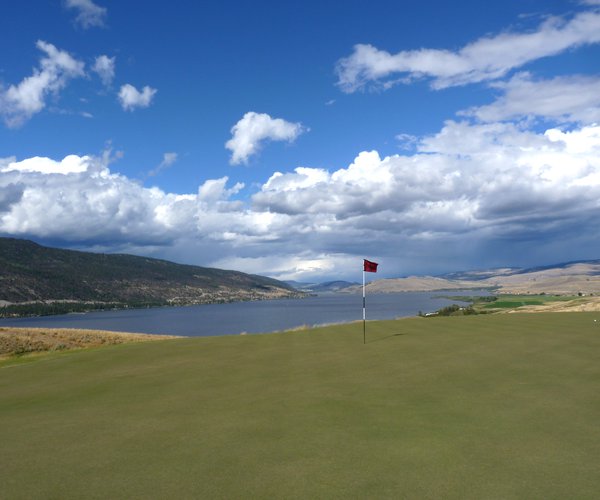 Sagebrush Golf & Sporting Club: [DUE TO A PENDING OWNERSHIP CHANGE and "re-zoning" issues (announced in Feb 2015) Sagebrush delayed its opening in 2015. CHECK CURRENT STATUS before booking].

Observing the tenets of "minimalist" design, which involved not disturbing too much of what was already here, Sagebrush presents a classical links-style championship golf course. Occupying an open rugged slope that gently tilts down to Nicola Lake, this is a course that sets pulses racing.

The individually crafted holes traverse across an expansive and almost treeless environment. If you stray too far offline, yellow-flowering sagebrush plants and desert scrub lies in wait. Below the course the ever-present and immensely scenic lake stretches out for 10km in each direction. Although the course never quite gets you lakeside, holes like the par-4 2nd are played to an infinity green, which seemingly hangs out over the lake.

Rustic edged bunkering, gently rolling terrain and high fescues beyond the good-width fairways all play their part here. On and around the greens (in keeping with the links courses of Britain & Ireland) your short game skills will be thoroughly tested. Some of the greens will redefine your understanding of "oversized", with slick run-off areas also frequently present. The par-5 7th green measures a mere 75 yards from front to back, while the putting surface at the par-5 16th is an equally hard to comprehend 23,000 square feet.

Now open for public play, until such time as the facility becomes fully subscribed with members (which won't happen soon), this is definitely a course that will appeal to all golfers, not least links aficionados.

Semi-private club; visitors welcome on weekdays and and weekends during golf season (April thru' Oct).

Walking permitted at all times (but golf cart recommended).

The "minimalist" genre of golf design, as employed at Sagebrush, is one that attempts to move as little earth as possible when constructing the course, relying on the natural features of the land to create the layout's topography and playing environment. Although the original designers of golf courses (e.g. Old Tom Morris, Willie Park, James Braid, et al) would not have labelled themselves as "minimalists", this was nonetheless at the core of the courses they built. | "Terry's Hideout" at Sagebrush, a delayed half-way house, comes between the 12th and 13th holes. Players are invited to stop here for as long as they want. The Hideout's restaurant and bar sit alongside a reservoir, well stocked with trout, where you can indulge your fly-fishing skills before re-starting your round.