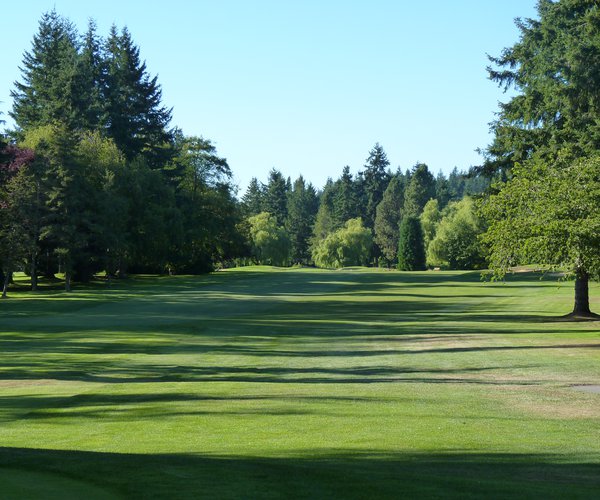 Shaughnessy Golf & Country Club: Originally called Shaughnessy Heights Golf Club (and located 6 km east of the present site), this handsomely tree-lined parkland course is laid out alongside the Fraser River and Strait of Georgia. The current course was built in 1960, at which time a wonderful variety of trees were donated and planted by the members. There are now more than 150 species of trees on the property, which flower at different times providing continuous splashes of colour around the course between March and September. Some of the large firs and cedars are more than 200 years old.

"Mac" Macan's excellent layout occupies relatively flat terrain, through which the elegant tree-lined holes are arranged in two nine-hole loops. Although not a particularly expansive or roaming layout, the mix of straightaway and doglegging holes contain an excellent array of golfing challenges. The ability to "shape the ball" in both directions from the tee will give long-hitters a distinct advantage, especially on the doglegging holes.

Water hazards are few and far between at Shaughnessy, but there's an abundance of stylish bunkering as you look out from the tee, and as you weigh up approach shots into the large subtly sloping greens. The green surrounds often present a "minefield" of bunkering and mounding. You may feel the fairways get a tad tighter on the back-nine, which is played to the west of clubhouse (the front-nine loops out to the east).

The walk/drive from the 9th to the 10th, and then the par-4 10th and par-5 11th get you alongside the Fraser River. From here you can inspect the impressive logging operation out on the water, and take-in a spectacular vista that includes Vancouver Island and the Olympic Mountains. Shaughnessy is a "must play" Vancouver course ... if you can secure a tee-time at this private club.

Shaughnessy is a private club. Generally, guests may only play if hosted by a member. Contact club for playing possibilities for outside visitors.

Walking permitted at all times. Golf carts available to rent.