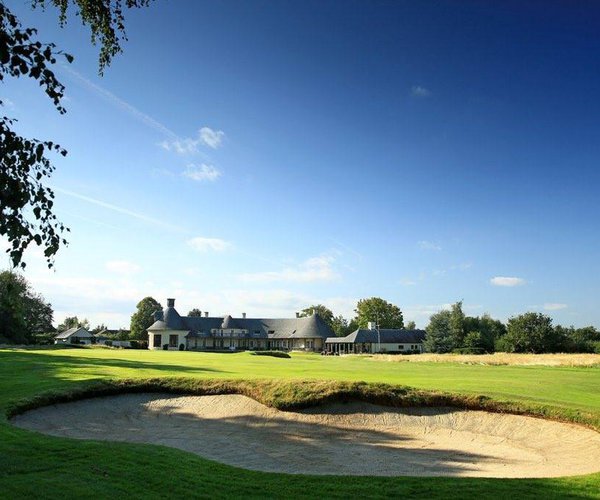 Alwoodley Golf Club, like its close neighbours Sand Moor and Moor Town, occupies a wonderful tract of prime golfing terrain. Here in the northern outskirts of Leeds, this large area of gently undulating, easy-draining heathland was eagerly eyed by golfers in the early 1900s. The land, which forms part of Wigton Heath, merited the attention of a top-quality designer. This it got from Dr Alister MacKenzie, at the time a local resident and later acknowledged as one of the greatest golf course designers of all time.

The Alwoodley course follows an absorbing out-and-back design, offering up an enjoyable variety of golfing challenges. The layout remains much the same today as in 1907 when it was originally laid out, although lengthened over the years to its present 6,900 yards. Tightish, springy fairways are bordered by heather, gorse and occasionally woodland, while the excellently maintained and often large greens will thoroughly test your putting skills.

In keeping with most MacKenzie designs, the bunkering is plentiful, constantly posing a threat from the tee and around the greens. The back-nine is frequently played into freshening winds, further adding to the golfing test at hand.

The layout at Alwoodley Golf Club was the first of many designs crafted by Dr Alister MacKenzie. The renowned Yorkshire-born golf architect went onto design neighbouring Moor Town and Sand Moor, as well as a host of household name courses around the globe. Augusta National, Cypress Point and Crystal Downs in the U.S., and Royal Melbourne in Australia are considered amongst his finest creations. MacKenzie was born in 1870 in Normanton, near Leeds, the son of Scottish parents. Although christened Alexander, after his paternal grandfather, he was called Alister from birth (which is Gaelic for Alexander). He died in 1934 in California, leaving behind a blueprint for future golf course design and a legacy of classic courses. Often referred to as the 'Course Doctor', MacKenzie was a founder member of Alwoodley Golf Club.