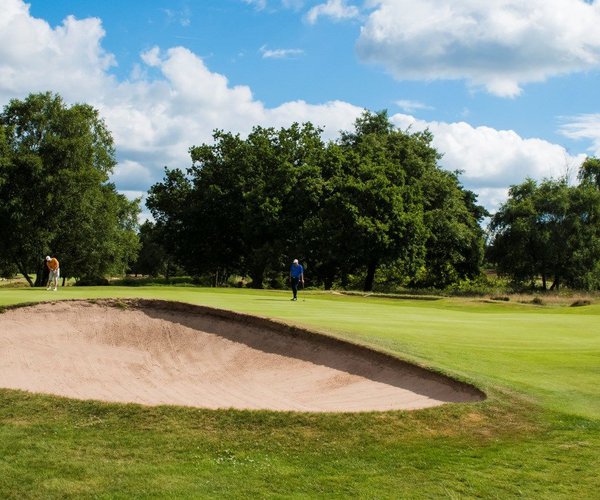 Leave the M6 motorway at exit 11, and follow the A460 direction Cannock, then Hednesford, then Rugeley. After 6.6 mi turn right into Rawnsley Rd. After o.7 mi turn left into Rugeley Rd, direction Hazel Slade. After 1 mi golf club is on your left.

Beau Desert Golf Club is located in the south of an area known as Cannock Chase, the largest surviving area of lowland heathland in the Midlands. The course takes its name from the Marquess of Anglesey's estate (Beaudesert), in whose former grounds the course is laid out. You'll quickly discover that “Beau” is an apt description for the layout, while “desert” probably refers to the site's original habitat, which was open sandy heathland.

Once you’ve cleared the intimidating heather-clad “ravine” in front of the tee at the short par-4 1st, you'll be in for a real treat on this picturesque undulating heathland course. In addition to plenty of heather and some gorse, an abundance of pine and birch gives a rather wooded and tightish feel to many holes.

Herbert Fowler’s excellent layout, complemented by some lovely views of the surrounding Staffordshire countryside, ensures great variety and many golfing challenges as you journey round. Most of the holes take you either up or downhill, few are played on flat terrain, and each has its own distinctive character and identity.

You'll enjoy both a sense of isolation and tranquility here, with an absence of housing and roads allowing you to fully focus on your game, and the beauty of the heathland and woodland surroundings. Often included in ranking lists of the best heathland courses in England, Beau Desert is certainly well worth a stopover as you journey through the West Midlands.

Beau Desert golf course is laid out on a section of what was formerly part of the Staffordshire estate of the 6th Marquess of Anglesey, Charles Henry Alexander Paget. Until 1919 the Marquess was a great supporter of the golf club. However, financial difficulties after the Great War required the Marquess to abandon Beaudesert Hall (a magnificent country mansion house, now no more than a few ruins) and retire to his family's ancestral seat, Plas Newydd in Llanfairpwllgwyngyll, Anglesey.