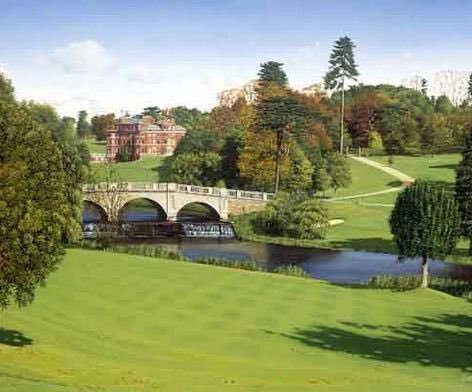 From first to last, the River Lea (or Lee) will play an important part in your round on the Melbourne course. The opening four holes on the Melbourne provide a challenging (and watery) start to the round, with some accurate driving and approach work needed, not least at the first hole, most of which slopes down towards the river.

There are plenty of views of stately Brocket Hall to be enjoyed from this pleasantly undulating parkland layout, the middle section of which is relatively open, nicely mounded and heavily bunkered.

Pick of the holes: You (and more importantly your ball) will need to cross the river four times; on the last occasion, at the excellent risk-reward par-5 18th hole, your journey involves a short excursion on an unmanned ferry, which carries you across the Broadwater to the final green. Leading up to this finale, you will have enjoyed a more open and less wooded layout than is the case on the Palmerston.

Must book in advance. Maximum handicap: men 28; women 36. Proof of handicap may be requested.

Brocket Hall, built in 1760 by Sir Matthew Lamb, has been home to two former British Prime Ministers - Lord Melbourne and Lord Palmerston, both of whom served during the long reign of Queen Victoria. William Lamb, 2nd Viscount Melbourne, served as Prime Minister in 1834 and again from 1835 to 1841. He was a mentor of Queen Victoria. Henry John Temple, 3rd Viscount Palmerston, first served as Prime Minister in 1855, aged seventy. He served for three years, but was never much liked by Queen Victoria. His second period as Prime Minister started in 1859 when he was aged 75, and ended in 1865. Although nearly eighty-one years old, he refused to retire and was again elected to Parliament. Before he could take up office he became ill and was forced to stay on his estate at Brocket Hall. He died on 18th October, 1865.