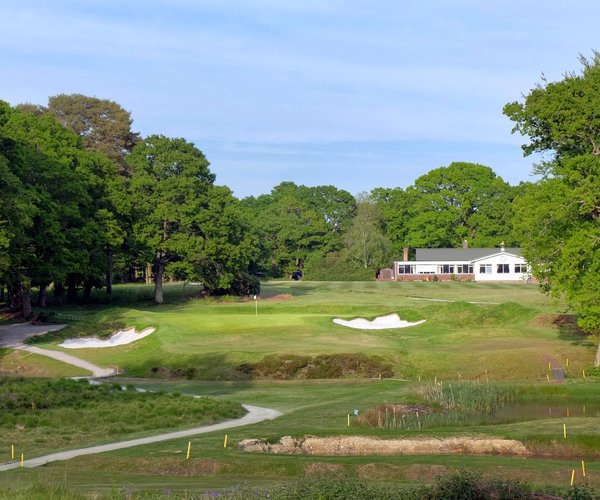 Leave the M27 motorway at exit 1 and follow the A337, direction Lyndhurst, then Brockenhurst. After 7.4 miles, just before Brockenhurst, turn right onto the B3055, direction Sway / New Milton. After 1.2 miles golf is on your right.

Brokenhurst Manor Golf Club: Spectacular might be too strong a word to describe this very pleasant, gently undulating golf course, which is laid-out in three 6-hole loops, each originating and ending near the spacious Clubhouse. Although deep in the New Forest, you will not feel too hemmed in by trees, the course being more open than one might expect.
Water hazards appear infrequently, with only one or two of the usually flattish fairways crossed by small streams. Generally it is the well-placed bunkers and occasional roller-coaster greens that will present the major golfing challenge. Apart from an occasional train that may speed past on the nearby mainline railway, it is more likely to be the knocking of woodpeckers and cooing of doves that breaks the tranquillity and silence of this enjoyable, Harry Colt designed, woodland course.

Visitors welcome on weekdays and after 9:15am on weekends.

In 1079, William I of England (1027-1087), better known as William the Conqueror, is attributed with naming a large swathe of woodland and heathland in southern England, "Nova Foresta". Little could he imagine that nearly 1000 years later his new hunting forest (which occupies virtually the whole of south-west Hampshire) would still retain its charm, mystery and romance. The Manor near the village of Brockenhurst, was originally an Elizabethan farmhouse. Somewhere in its history the "c" of Brockenhurst went missing !