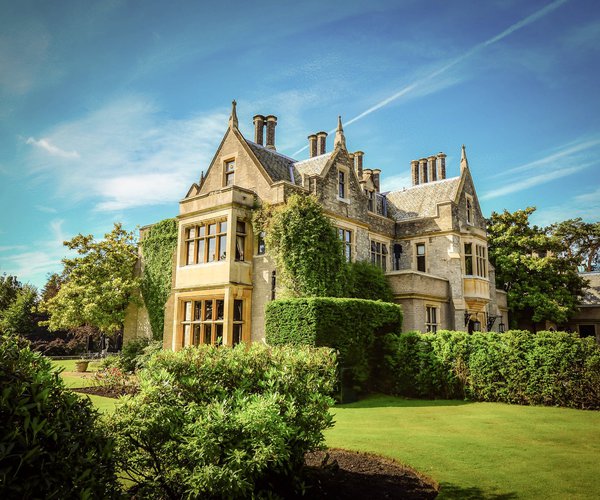 Foxhills Hotel & Resort (Bernard Hunt course): Foxhills is located at the heart of Surrey's fabulous array of heathland golf courses; its near neighbours include the likes of Wentworth, Sunningdale, St George's Hill and the three W's. Within this beautifully wooded and gently undulating country estate, Foxhills boasts two top-quality championship courses of its own.
The Bernard Hunt course (formerly known as the Chertsey) roams its way through a mixture of tree-lined avenues and slightly more open, parkland environments. Like all the neighbouring courses in the area, the layout carries some distinctly heathland overtones, with mature birch and pine trees much in evidence and a sprinkling of gorse and heather here and there. The fairways are often quite tight, with trees as well as ball-swallowing grasses and bushes awaiting anything hit too far offline.
On each nine, the pleasantly wooded opening and closing stretches give way to a less densely tree-lined middle section. Here you will encounter a couple of par-5's where small ponds threaten your second shot; a picturesque lining of bulrushes clearly indicates where these water hazards lurk. The need for accuracy off the tee remains a constant throughout, as does careful approach play to hit the not overly large greens. Keep a lookout for deer and rabbits on your way round; you might even catch a glimpse of a wily, old fox or two, but not (one trusts), the original owner of the estate (see Did You Know section below).

Visitors welcome on weekdays and after midday on weekends.

The Foxhills Estate was originally established in the 1700s as a country retreat for Charles James Fox, a brilliant parliamentarian of his day. Fox's passionate oratory was matched by a love of the high life, and also in later life, gardening. He was responsible for significant tree-planting in this area, which became known as "Fox's Hills." | In the 1960s the estate was acquired by Aer Lingus, who built and opened the two golf courses in 1975. Successful businessman Ian Hayton realised Foxhills' true potential, buying it in 1983 for £1.4 million, and redeveloping it into one of the UK's most successful golf resorts. | Foxhills has hosted many top level tournaments, including the Women's British Open in 1978. | Originally called the Chertsey course, the Bernard Hunt was re-named in recognition of Hunt's contribution to golf and to Foxhills. Hunt won 30 professional tournaments, also playing in eight Ryder Cups.