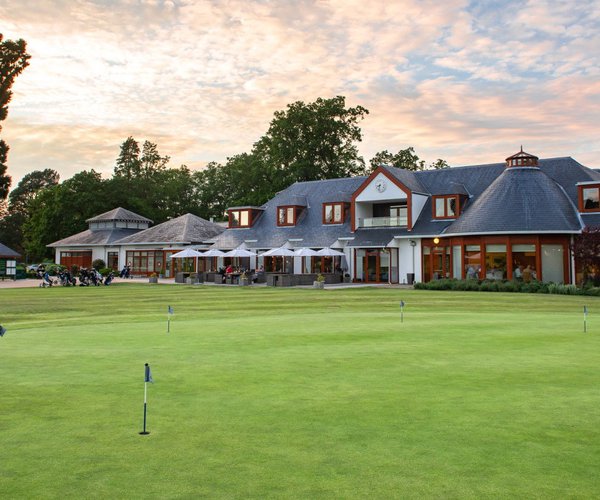 North Hants Golf Club is located at the western edge of a fabulous collection of heathland golf courses, each of which resides on a sand-belt that starts in the east with the likes of Wentworth and Sunningdale, heads south and west through The Berkshire, Swinley Forest and the three W's (Woking, Worplesdon and West Hill) and eventually comes to a conclusion here at North Hants.
Like so many of the aforementioned, North Hants also started life as a relatively open heathland course, but the growth of trees has re-defined it (and most of the others) into something better described as wooded heathland. Pine, birch, rhododendrons and the like now mix freely with the swathes of heather and gorse that originally dominated the heath. The result is a picturesque layout, full of pleasant undulations and well-shaped holes, requiring a relatively straight game from the tee and good shot-making thereafter to score well.
North Hants is a deceptively challenging course. With its large greens and a number of long par fours, it is capable of testing golfers of all levels, and once a year stages the Hampshire Hog - a prestigious and long established 36-hole men’s scratch amateur event.

North Hants is the home club of English professional, Justin Rose. When aged only 14, he won the club's most presitgious open amateur tournament, the Hampshire Hog, setting a new course record of 65 in the process. When Justin turned professional in 1998, he was still only a junior member of the club.