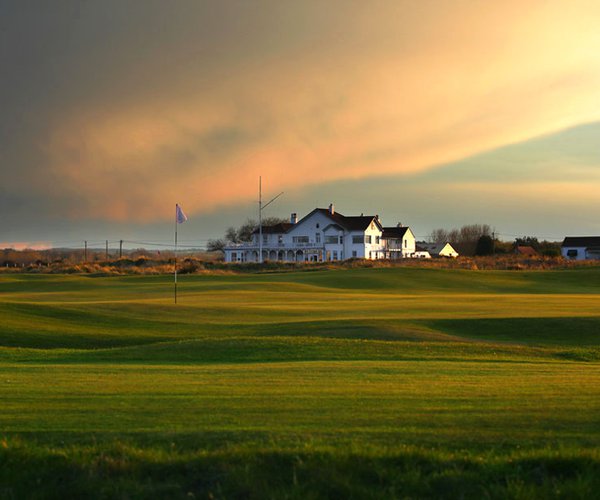 FROM CENTRE OF DEAL: follow the coast road south to the end, bearing left into Godwyn Rd. After 200 yds at T-junction turn right into Golf Rd. After 100 yds where main road bears right, bear left into small access road (still Golf Rd). Golf is 200 yds on your left. | FROM THE A258 (Sandwich-Deal road): head south through Sholden and at first roundabout turn left direction Deal Town Centre/Seafront. After 150 yds turn left into Middle Deal Rd. After o.8 miles turn left into Albert Rd, which becomes Golf Rd. Follow Golf Rd as indicated above.

Royal Cinque Ports Golf Club: Facing out onto the North Sea, this stretch of the Kent coast is home to a triumvirate of superb seaside links golf courses. All three have at some time hosted the Open Championship. The southernmost of the three is Royal Cinque Ports, also known as "Deal."

As one of England's most authentic and natural links golf courses, Deal is a much revered gem. As you'll discover once you get into the course, the seemingly flattish terrain is in fact full of subtle mounds, bumps and hollows, creating plenty of interest on every hole, as well as a few blind and semi-blind tee and approach shots. Assuming wayward drives can be found, digging your way out of the fairway-lining rough is just one of the many challenges you'll face. Avoiding entrapment in the numerous steep-faced bunkers will also thoroughly test your course management and golfing skills.

Amongst many memorable holes, the par-5 3rd is played to a wonderful sunken green, while the short par-4 6th doglegs from left to right around the corner of a substantial sand hill. On this testing risk-reward hole you'll need an accurate, well-placed drive followed by a perfect pitch to hold the wickedly raised green. The long par-4 18th also deserves a special mention. It has turned many a match and substantially added to the scores of would-be champions. A closing hole to treat with great respect.

With sea-views on the front-nine, and plenty of undulation and greater length on the inward nine, "Deal" lays down a fabulous test for all links enthusiasts, although perhaps a tough one for higher-handicappers.

Visitors welcome on weekdays and weekends. RCPGC is primarily a two-ball and foursome golf club. Three-ball and four-ball play is permiited on Mon and Thur.

In its 125-year history, RCPGC has had only six Head Professionals. Currently holding that office is Andrew Reynolds, who was appointed in 1978 and enjoys an excellent reputation amongst his fellow professionals and pupils alike.

Sitting cheek by jowl along this stretch of Kent coast are three golf courses that have hosted The Open Championship: Royal St Georges (several times since 1894), Royal Cinque Ports (1909, 1920) and Prince's (1932). Only Royal St Georges is on the current Open championship rosta.