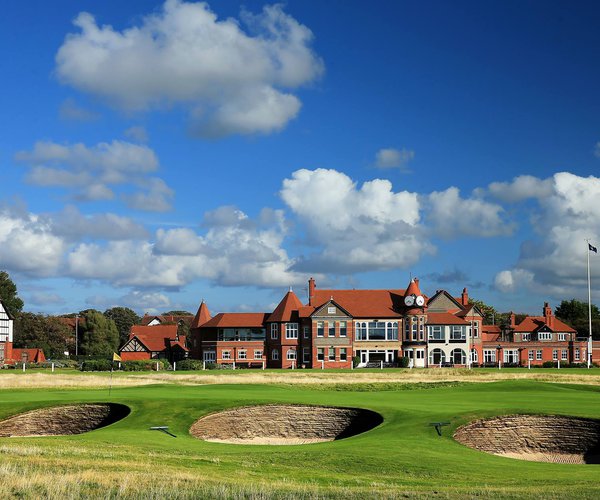 Royal Liverpool Golf Club (Hoylake): This excellently maintained and challenging links layout is a firm favourite with amateur and professional golfers alike. It is also a course that's firmly back on the Open Championship roster. As the second oldest seaside links course in England (Royal North Devon is five years older), "Hoylake" commands a special place in Britain's golfing heritage.

At first glance Hoylake can look relatively flat and benign; nothing can be further from the truth. Although sizable sand dunes feature on less than half the holes, don't think Hoylake lacks bite. The opening hole is a knee-trembling bunkerless par-4. Your opening tee-shot is flanked by out of bounds on one side and the Clubhouse on the other; the hole sharply doglegs right with the OB continuing up to the green.

Throughout the round you’ll need to focus your full attention on the demands and subtleties of this challenging course. Its twin recurring threats come in the form of excellent bunkering and often penal rough. Out-of-bounds is also present on some later holes, not just the par-4 opener.

As you zig-zag out to the turn, and then play alongside the Dee Estuary from the par-4 9th to the wonderfully bunkered par-3 13th, it's easy to understand why this venerable old course commands so much respect with links golf devotees.

Visitors welcome on weekdays; outside visitor play is very restricted on weekends.

This is a walking-only course. Players unable to walk the course for a medically certificated reason can apply for permission to hire a golf cart (buggy).

Royal Liverpool has hosted many top-level competitions during its illustrious history. Several Open Championships, Amateur Championships, Walker and Curtis Cups have been decided on the links of Hoylake (see our Tournaments section >by Venue >Royal Liverpool). | The club's motto is "Far and Sure".

One of Royal Liverpool's most renowned former players is John Ball, eight times winner of the Amateur Championship and first English-born winner of The Open (1890). He was born in Hoylake, where his father was the owner of the Royal Hotel. Ball grew up playing golf on the Royal Liverpool course.