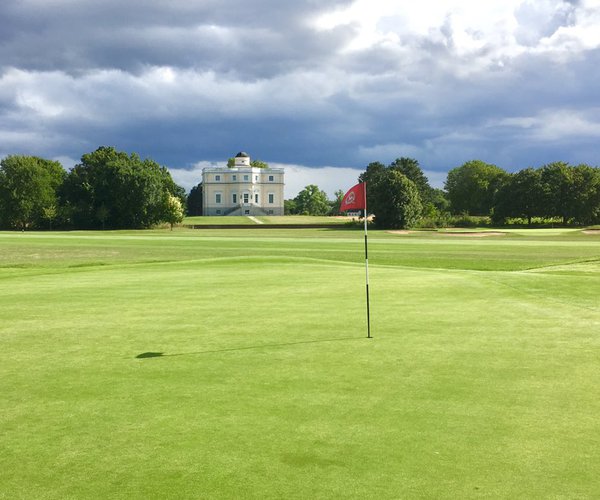 From London take the A4 (heading west) direction Heathrow / M25; at the Hogarth roundabout follow the A316 direction Richmond / M3. Follow the A316 for approximately 2.9 miles. Immediately after the roundabout at Richmond (with Richmond town centre and A307 indicated to the left) stay on the A316 but immediately look for two adjacent right turns. The first (ignore) goes into the Richmond Athletic Ground (rugby). Take the second right turn direction Royal Mid-Surrey GC. After 200 yards golf is on your right.

The J.H. Taylor course has recently benefitted from an ongoing renovation project, completed in 2014. The terrain remains essentially flat, although fairway-lining humps and hollows, extensive bunkering and a pleasant scattering of trees, all contribute to the golfing challenges and attractive golfing environment. Sections of the course skirt around the impressive King's Observatory (completed in 1769 in time to allow George III to observe the transit of Venus). Kew Garden's famous Pagoda also comes into view from the course, but alas the nearby River Thames remains stubbornly out of sight.

This part of Richmond is located close to the most used flightpath into London's busy Heathrow airport. Like the members here, you may need to pause a moment during an overhead fly-past, but don't let that detract from your enjoyment of this otherwise very pleasant and historic course, and its attractive open parkland setting.

Private club, guests may only play if hosted by a member.

Outside visitor fee not applicable; members only club.

Mid-Surrey is so named, not because it's in the middle of the county of Surrey, but because it lies on the border between the counties of Middlesex and Surrey. Among its past officers, Royal Mid-Surrey can boast Dukes, Princes and a King. The second Duke of Cambridge was the Club's first President; Prince Andrew, Duke of York was captain in 2003, and Edward VIII was captain in 1926 (at the time he was Edward, Prince of Wales). | The club also boasts considerable golfing "royalty". John Henry "J.H." Taylor (five times Open Champion and a member of the Great Triumvirate) was the club professional from 1898 until 1948. Taylor was succeeded by Henry Cotton, another multiple Open Championship winner.