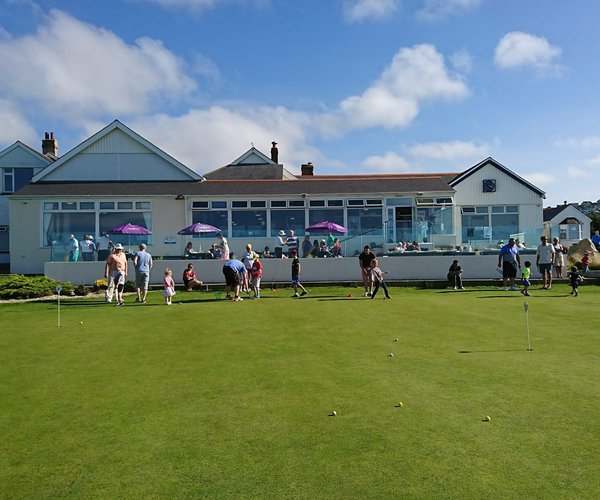 From Barnstaple take the A39 west for 9 mi, direction Bideford. After crossing the River Torridge bridge, turn right at the roundabout and follow A386 direction Northam/Westward Ho! After o.3 mi turn right direction Town Centre and follow Golf signs for o.7 mi through Northam. Golf is on your right in Golf Links Rd.

Royal North Devon Golf Club: Many golf aficionados hold RND in very high esteem. After all, it is England's oldest golf course, and much steeped in history. It is also the starting point for the career of one of England's greatest professional golfers, JH Taylor, and a great amateur, Horace Hutchinson. Teeing it up at Westward Ho! is to take a step into the timeless world of authentic seaside links golf.

The layout of this open treeless links has not changed much for well over 100 years. On relatively flat wind-exposed terrain, golfers still share the Northam Burrows (dunes) with sheep and horses; the greens are roped off from the grazing livestock. The layout's main defences are found in a wide array of strategically located bunkers. Many mischievous pot bunkers are complemented by yawning railway-sleepered traps; Cape bunker at the par-4 4th is the most intimidating. Water ditches also put in some telling appearances.

Arguably the best stretch of holes starts with the excellently bunkered par-4 4th and runs through to the par-4 10th. This stretch of holes utilises a natural pebble ridge and brings you closest to the expansive beaches at the mouth of the River Taw. The superb par-4 6th is included in this stretch. Either side of this excellent run of holes, the layout occupies flatter terrain where white marker stones help you pick the right line in a relatively featureless environment.

RND is not a manicured course, nor should it be. Many golfers revere Westward Ho! as links golf at its most authentic and best. Others looking for a dramatic and testing 'trophy' course may be a tad disappointed. Either way, it's well worth a visit to England’s oldest golf course; it might just get you hooked on golf as it was meant to be!

Visitors welcome on weekdays and after midday on weekends.

Royal North Devon is home to the oldest surviving golf course in England (est. 1864), and the world's second oldest Ladies Golf Club (1868) (one year younger than St Andrews Ladies, 1867). Royal Blackheath (1608) in London is a much older golf club, but its members play on a relatively new course (1923). In RND's clubhouse you'll find a small museum, with many historical artefacts and interesting insights into the game.

One of England's greatest golfers, John Henry "J.H." Taylor, was born in nearby Northam. Aged 11 he was employed as a caddy and labourer at RND. He turned professional at 19, and became a five-time Open Championship winner, and member of the renowned "Great Triumvirate" with James Braid and Harry Vardon.