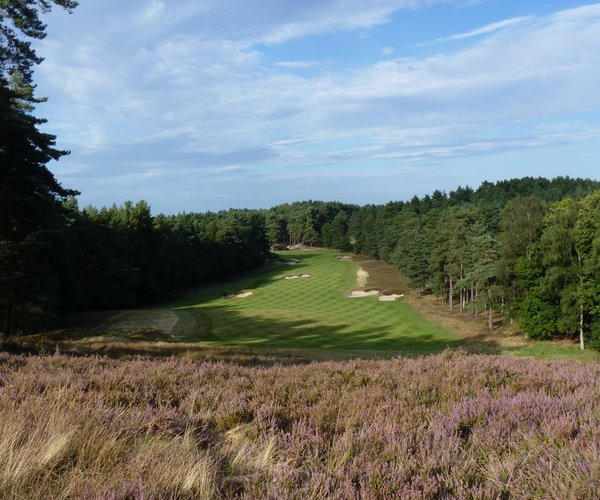 From the M3 motorway take exit 3. Follow the A322, direction Bracknell/Legoland. After 1.2 mi turn left onto the A30, direction London/Staines/Sunningdale. After 2.6 mi turn right into Cross Rd (look for small golf flag sign). After o.4 mi turn left. Golf is indicated 200 yards on your right.

Sunningdale Golf Club (Old course): Sunningdale is first and foremost a golf club, and home to two outstanding heathland courses. Some of its close neighbours may have developed more of a country club or "corporate" reputation, but Sunningdale remains resolutely a golf club. Located at the centre of an enviable array of Surrey-Berkshire heathland courses, there is no finer example than the Old Course at Sunningdale. For many, it is simply one of the finest inland golf courses on the planet.

Often described as designer Willie Park Jr's masterpiece, the undulating Old course is set within the beautiful environs of a birch and pine forest. Most famous of all the trees is the "Sunningdale Oak", found alongside the 18th green and providing the club with its emblem.

A stunning heathland tapestry awaits on your nine-hole journey out from the clubhouse, then back to it on the second nine. Stray too far offline and you'll discover that trees are not your only "worries". An abundance of heather, gorse and longer fescue grasses are also to be found defining the fairways. Also much in play is a myriad of pot bunkers, cross-bunkers, fairway bunkers and greenside bunkers. Some are heather-topped, others have a smoother finish with the ability to gather-in balls from seemingly far and wide.

The Old course has played host to many top-level matches and championships. As part of qualifying for the Open Championship in 1926, the great amateur Bobby Jones played one of Sunningdale's most revered rounds. His score of 66 comprised 33 shots and 33 putts. At the time it was hailed as the perfect round of golf.

Visitors welcome on Mon-Thurs. No outside visitors on Fri-Sun.

The venerable Old course at Sunningdale has played host to many top-level tournaments, not least British Women's and Senior Open championships, numerous European Tour and European Senior Tour events, the Walker Cup, the Seve Trophy and early editions of the PGA "News of the World" Match Play (see our Tournaments section >by Venue >Sunningdale.

Included amongst the Club's impressive list of former captains, you will find the Prince of Wales (later Edward VIII) and his brother the Duke of York (later George VI).