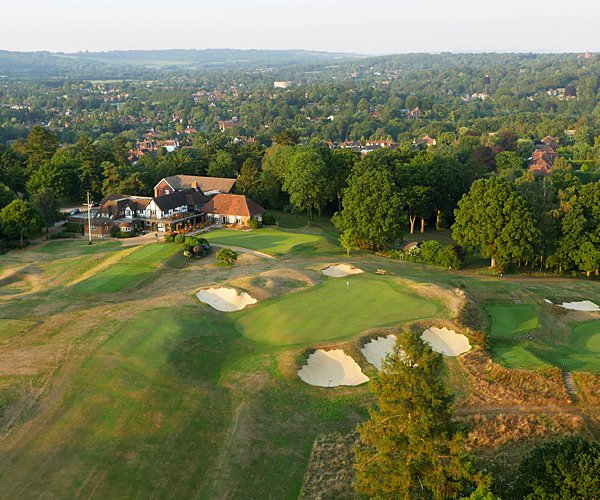 Tandridge Golf Club: The county of Surrey contains a seemingly endless supply of great heathland and parkland golf courses. Justifiably to be counted amongst the best is Tandridge; a delightful course set in mature woodland on the outskirts of the village of Old Oxted.

When Tandridge opened for play in 1924, the view of The Times golf correspondent was that, "Mr Colt's architecture and layout has been carried out on a grand, bold scale, eminently fair but devilishly ingenious". Nowadays the course is wooded parkland in character rather than wide open heath, but there are still some tell-tale heathland features. The chalky subsoil ensures excellent drainage when its wet; but water (as on most Harry Colt heathland designs) will not be your main concern when playing the golf course.

With good width fairways, the challenge of Tandridge is to be found in hitting its well-protected and often elevated putting surfaces. Stylish bunkering guards most of the greens; thick rough often threatens when bunkers are not present. Colt originally deployed 300 bunkers around the course. Over the years this has been trimmed to nearer 100, without losing the essential character of the great man's design.

After the sublime pleasures of the reasonably flat front-nine loop, you set off again from the clubhouse for the back-nine loop. Here you'll enjoy greater undulations in the terrain, as well as the best of the beautiful views onto the North Downs and Surrey/Sussex Weald. The ups and downs of the back-nine peak at the breathtaking downhill par-4 14th, but only after you've dealt with the testing long-par-3 13th.

Visitors welcome on Mon, Wed and Thur; also after 4:30 pm on any day in summer.

Tandridge is a walking course.

It was Sir Henry Gibson who proposed that a new golf course be built on the Tandridge Park Estate in 1922. The estimated cost of the project was £10,000 (equivalent to £450,000 in 2015). Included in the budget was the clubhouse, which unfortunately burnt down a year after the club opened. In its place Tandridge invested in a splendid Tudor-style clubhouse with beamed ceilings and wainscoting (wood panelling), which still provides a fitting "19th hole" finale to the excellent Harry Colt designed golf course.