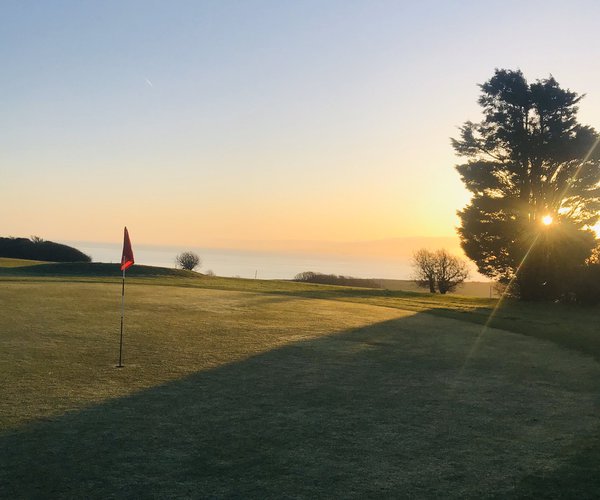 Walmer & Kingsdown Golf Club is home to an enjoyable "downland" golf course, laid out by the renowned Scottish golfer/designer James Braid. Perched atop the world-famous White Cliffs of Dover, the unique location of this layout delivers stunning sea views across the English Channel to the coast of France.

This tree-lined and open parkland course contains a variety of attractive holes and pleasant features. Many of the sloping fairways lead you to distinctive square-shaped plateau greens, several protected by low grassy banks and ridges.

A course that provides an enjoyable test of your golfing skills, while serving-up many spectacular sea views. The ever-undulating layout also provides you with some reasonably vigorous exercise, not least at the short uphill par-4 1st hole ... and several holes thereafter. Worth a visit if you are in the area and have some time to spare.

Visitors welcome on weekdays, and weekends (after 1pm).

The villages of Walmer and Kingsdown lie just south of the town of Deal, on the North Sea facing Kent coast. In common with Deal, Walmer is also home to a former artillery fort constructed between 1539 and 1540, in the reign of Henry VIII. The forts, known as Device Forts or Henrician castles, formed part of the King's programme to protect against possible invasion from France and the Holy Roman Empire. The "Device" programme was very expensive, with much of the cost met by Henry's dissolution of the monasteries a few years before.