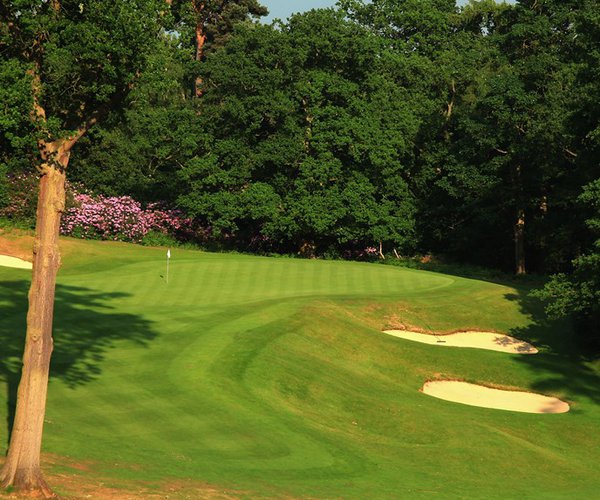 Woburn Golf Club (Marquess' course): The Marquess' course is the newest and arguably brightest jewel in the Woburn crown. It is flanked by Woburn's other shining gems - the Duke's and the Duchess' courses.

The Marquess' is laid out in a natural woodland habitat, with many beech, birch, pine and oak trees majestically defining the holes. The rolling though not overly hilly terrain, provides the course with its pleasant undulations and elevation changes. Good width fairways invite big-hitting, although there's plenty of grassy semi-rough in front of the ever-present tree-line. This can make recovery shots from wayward drives a testing proposition. Large and fast greens, full of subtle borrows, are well defended by plenty of strategically placed and stylishly crafted bunkers.

The short par-4 12th is the only hole where water seriously threatens; it is also one of the best risk-reward holes on the Duke of Bedford's Woburn Estate. An earlier risk-reward opportunity comes at the par-5 7th, which you can play up the leftside as a conventional three-shot hole or take the riskier two-shot route up the right side of the split fairway.

There are a few courses in England that vie for the title of England’s "Augusta National"; the Marquess' course is one of the leading claimants to this honour. Although not quite as famous as its Augusta counterpart, the Marquess' is now regarded as Woburn's "Trophy" course, having played host on several occasions to the British Masters and European Senior Masters.

The grounds of the Woburn Estate always possessed the ingredients for the creation of a top-calibre golf venue. Located just 30 minutes from London's M25 orbital motorway, a large and natural expanse of undulating forest was complemented by fast-draining sandy soil, perfect for golf. In 1974, Robin Russell (the 14th Duke of Bedford), who was then Marquess of Tavistock, brought the dream to reality with the launch of a world-class golf facility at Woburn.

Since its establishment Woburn has hosted many top-level golf tournaments on all three of its championship layouts. For more details see Top Golf Tournaments at Woburn Golf Club.
Current European Tour player Ian Poulter and Ladies European Tour player Charley Hull have a close association with Woburn, as its touring professionals.