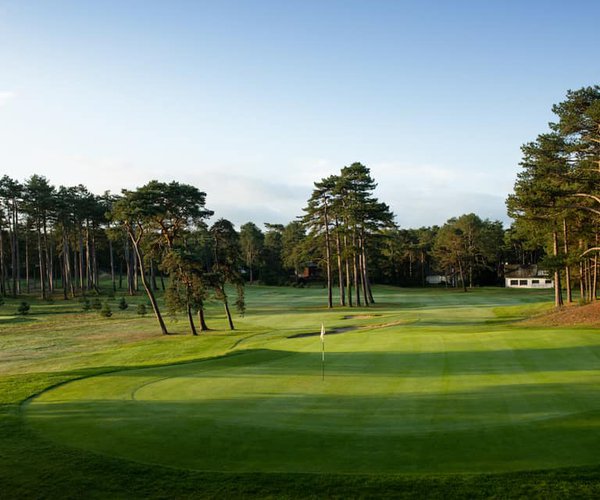 Above distances are for Les Pins course. Located 1 km away is Hardelot's 18-hole Les Dunes course (par-70, 5328 m from back tees).

Leave the A16 (Boulogne-Le Touquet motorway) at exit 27. Follow the D308 towards Neufchatel-Hardelot. After 1.1 km turn right onto the D940. After 100m turn left onto the D119 to Neufchatel. After 2.1 km turn left towards Hardelot Centre. After 1.4 km at roundabout take second exit to Golf. After 0.5 km turn right; golf is on the right.

Golf d'Hardelot (Les Pins course): A major renovation project conducted in 2014/15 considerably altered the character and challenge of Hardelot's No.1 layout. Previously overshadowed by the full-blooded "La Mer" links in nearby Le Touquet, the remodelling of Les Pins produced a more visually arresting layout, with copious rustic edged bunkering, large areas of exposed sand and many fewer pine trees lining the way than was previously the case.

Courtesy of the remodelling, the back-nine now plays its full role in proceedings. This second nine-hole loop can no longer be described as a flatter, easier-going and more bland sequel to what was always a challenging front-nine. The par-5 10th and 13th holes, as well as holes like the par-3 7th on the front-nine, have been transformed by the addition of sprawling rustic bunkers. Removing several of the blind drives that once characterised the front-nine has helped the overall playability of the course, although the "hard-pan" sand in the considerably more dramatic bunkering will certainly test your recovery skills to the full.

In addition to the revamped and enlarged bunkering, also more clearly in view is the housing that flanks several front-nine holes. The impression of a pleasant walk through a natural pine forest has slowly eroded over the years; now at least the course-side housing appears to have reached its limit.

Pick of the holes: The 18th provides a fitting finale to a round at Les Pins. This long straightaway par-4 is played from a splendidly elevated tee, and takes you in a straight line to a large green that sits directly in front of the two-storey clubhouse.

Golf d'Hardelot is a member of the Open Golf Club group, which manages over 30 golf properties in France, Belgium, Spain and Morocco, including several Stay&Play golf resort destinations. See the Open Golf Club website (opengolfclub.com) for a list of all their golf courses and hotels.