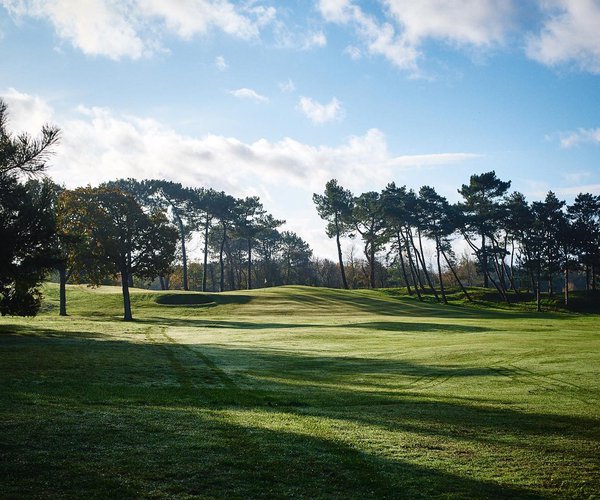 Leave the A16 motorway (Boulogne-Abbeville) at exit 26 (Le Touquet). Follow the N39 direction Etaples/Le Touquet. After 3.2 km, in Etaples, turn left at roundabout and cross River bridge. At roundabout (across bridge) turn right onto the N39 direction Le Touquet. After 2 km at traffic lights turn left at sign for Golf/Stella Plage. After 1 km golf is on your left (directly opposite Le Manoir Hotel).

Golf du Touquet (La Forêt course): On the Côte d’Opale, golfers from France, Britain and Belgium have been well-served for over a century by Golf du Touquet. In 1904 the Horace Hutchinson designed La Forêt course set the ball rolling. Some 25 years later the Stoneham family, who owned much of Le Touquet at the time, commissioned legendary designer Harry Colt to build a second course. Located amongst the dunes and closer to the sea, La Mer opened for play in 1931.

Although you won't be exposed to the dramatic sand hills of La Mer, La Forêt's back-nine contains many excellent holes benefitting from naturally contoured, gently undulating terrain. The downhill par-3 17th is one of the highlights of the closing stretch. With generally good-quality upkeep La Forêt provides a perfect foil to the impressive duneland La Mer course, and is not one to overlook on your visit to Le Touquet.

Must book in advance. Proof of handicap required

Golf du Touquet is a member of the Open Golf Club group, which manages over 45 golf properties in France, Benelux, Spain, Portugal, Italy and Morocco, including several Stay&Play golf resort destinations. See the Open Golf Club website (opengolfclub.com) for a list of all their golf courses and hotels.