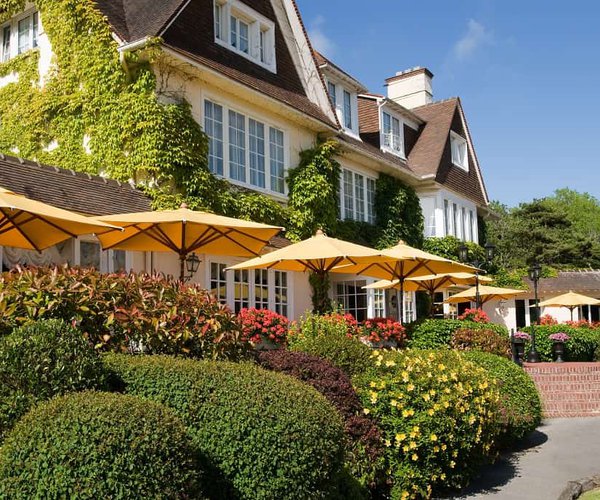 Leave the A16 motorway (Boulogne-Abbeville) at exit 26 (Le Touquet). Follow the N39 direction Etaples/Le Touquet. After 3.2 km, in Etaples, turn left at roundabout and cross River bridge. At roundabout (across bridge) turn right onto the N39 direction Le Touquet. After 2 km at traffic lights turn left at sign for Golf/Stella Plage. After 1 km golf is on your left (directly opposite Le Manoir Hotel).

Golf du Touquet (La Mer course): On the Côte d’Opale, golfers from France, Britain and Belgium have been well-served for over a century by Golf du Touquet. In 1904 the Horace Hutchinson designed La Forêt course set the ball rolling. Some 25 years later the Stoneham family, who owned much of Le Touquet at the time, commissioned legendary designer Harry Colt to build a second course. Located amongst the dunes and closer to the sea, La Mer opened for play in 1931.

Set in an unspoilt area of impressively mountainous dunes, La Mer ("The Sea") is the tougher and more scenic of the Le Touquet duo. On this expansive out-and-back links layout, the opening holes (including the excellent long par-3 2nd) increasingly became "tree-lined" over the years. In 2015 a significant renovation project reversed the creeping arboreal tide. These wonderful old links have been restored to their open duneland origins.

Impressive sand hills establish their presence from the "Redan" style par-3 7th through to the wonderfully elevated tee of the par-4 18th. Excellent contouring for the holes is provided by the large sand dunes, while bushes and small trees continue to offer definition to some of the holes on the opening stretch. Harry Colt’s terrific and varied layout, helped by a considerable amount of more recent remodelling on the back-nine, will keep you fully occupied and absorbed throughout. Slick run-off areas and deep bunkering around the greens will certainly test your short game skills.

The reward of sea views is held back until the 18th tee, with the English Channel (La Manche) in view a few hundred metres away to the west. Perhaps a victim of its own success, the course can take quite a pounding from the many visiting golfers it attracts. However, diligent green-keeping ensures the playing surfaces and especially the greens are generally maintained to championship standards.

Must book in advance. Proof of handicap required

The first tee of the La Mer course is a good 5-minute walk from the Clubhouse; it also has its own separate car park. | Le Touquet has hosted several French Open championships, the last of which was won by Seve Ballesteros in 1977. For more details see Top Golf Tournaments at Le Touquet Golf Club.
Golf du Touquet is a member of the Open Golf Club group, which manages over 45 golf properties in France, Benelux, Spain, Portugal, Italy and Morocco, including several Stay&Play golf resort destinations. See the Open Golf Club website (opengolfclub.com) for a list of all their golf courses and hotels.