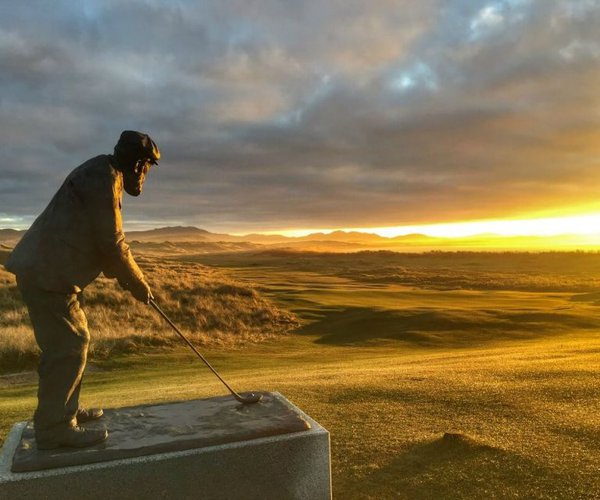 From Letterkenny, take the N56 direction Dunfanaghy. After 24 km turn right onto the R245 direction Carrickart (aka Carrigart or Carraig Airt). After 10.2 km, just before Carrickart village and its church, turn left direction Rosapenna. After 1.6 km turn left at T-junction onto R248. After 1.5 km turn left into Rosapenna Golf Pavillion.

Rosapenna Hotel & Golf Resort (Old Tom Morris Links): Rosapenna underwent something of a transformation in the early-2000s when the original Old Tom Morris Links (aka the Old Links) was joined by the newer Sandy Hills Links. Another transformation occurred in 2009, when Old Tom's original back-nine, which took you up and around "Coastguard Hill", was replaced with nine new "true-links" holes alongside the Sandy Hills layout.

Running to just under 7,000 yards off the championship tees, the Old Tom Morris Links now comprises two nine-hole loops, which both head out and come back to Rosapenna's impressive Golf Pavilion. On their way both nines sidle past the opening and closing holes of Sandy Links, with Old Tom's new holes (Strand-nine) following a slightly more inland route, while the original holes (Valley-nine) still flank magnificent Tramore Beach and Sheepshaven Bay. "Old Tom" now represents a testing fusion of traditional and modern links holes, which bridge a century of golf design influences.

The original outward holes of Old Tom's original layout forms the inward half of the new layout, the Valley-nine as it's called. This is as good and as natural a set of links golf holes as you'll find anywhere ... the seemingly flattish greens, as is the case on many great links courses, are a mystery unto themselves! The sea and beach views are fabulous, although many holes hunker down from the wind behind a row of dunes and bushes. The layout's much newer front-nine (Strand-nine) also contains many delightfully challenging links holes, ensuring the overall layout remains a big favourite with visiting golfers ... as it was in the days of Old Tom Morris himself.

The original back-nine of the Old Links were known as the "Coastguard Holes". They are now played as a separate nine-hole course (the Coastguard course) beginning and finishing at Rosapenna's practice ground.

It was in 1891 that the 4th Earl of Leitrim invited Old Tom Morris of St Andrews to come and design a golf course on links land close to the village of Rosapenna. Once built (or in those days, once the grass was cut and the course made ready for play), Old Tom was quick to tell others of his new layout in this stunning location on Ireland's north coast.

The Rosapenna course quickly became a place of pilgrimage for golfers at the turn of the century. Amongst those to follow were two other great golfing champions Harry Vardon and James Braid (in 1906) who won 11 Open Championship titles between them. They added length and more detailed bunkering to Rosapenna, but were wise enough to leave the wonderfully natural greens untouched. Further changes were made by the great Harry Colt in 1911.

To the south of Rosapenna are the two courses of St Patrick's Golf Links: the Maheramagorgan course designed by Eddie Hackett in 1982, and the Trá Mór course designed by Joanne O'Haire in 1993. Both courses are currently closed and lie dormant, but may re-open at a later date under the ownership of the Rosapenna Hotel & Golf Resort.