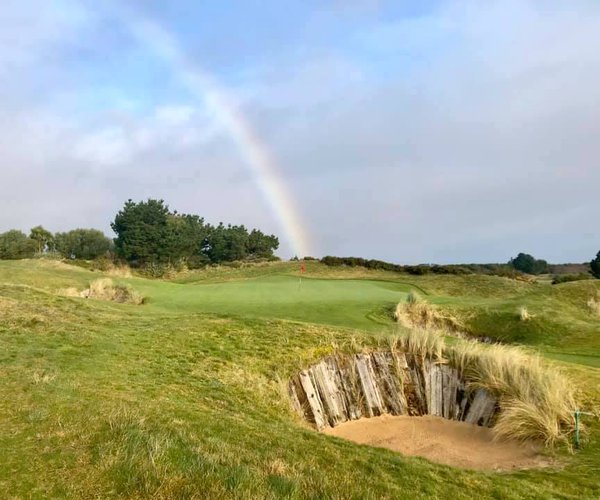 The European Club: A large and local fan base for this splendidly scenic and relatively recent links golf course was quickly established after it opened in 1987. That fan base rapidly rippled out across the golfing world. Perhaps no surprise that the 20-hole layout of the European Club is now routinely regarded as one of Ireland's best ... and most challenging.

After a rather tricky beginning, the course soon comes alive as it tumbles through dramatic sand dunes, and journeys down to the sea's edge. Here you will find some of the most spectacular golf holes anywhere in Ireland. Unusually and rather uniquely, this is a links course that features 20-holes - two extra par-3s (7a and 12a) are in play on most days.

With ever-undulating terrain, railway-sleepered bunkers galore and plenty of trouble awaiting stray drives (including the beach), your game will indeed be seriously challenged. As for testing your putting, the 127-yard green at the long par-4 12th, will see to that.

With sea views from most of the course, and many definitive seaside links holes, especially the ones skirting Brittas Bay, this is a course that does indeed deserve its place amongst Ireland's elite. The rather heavy green fee is obviously a reflection of the layout's growing reputation ( ... perhaps also influenced by its proximity to Dublin).

Must book in advance. No handicap restrictions, but players must be competent on a links course.

The European Club was created and the course laid out by its owner, golf-writer turned golf designer Pat Ruddy. Regular tweaks by Ruddy ensure this relatively modern design continues to remain current and ever challenging.

The European Club is quietly located just south of the popular holiday village of Brittas Bay, which boasts a 3 km beach which faces out onto the Irish Sea.