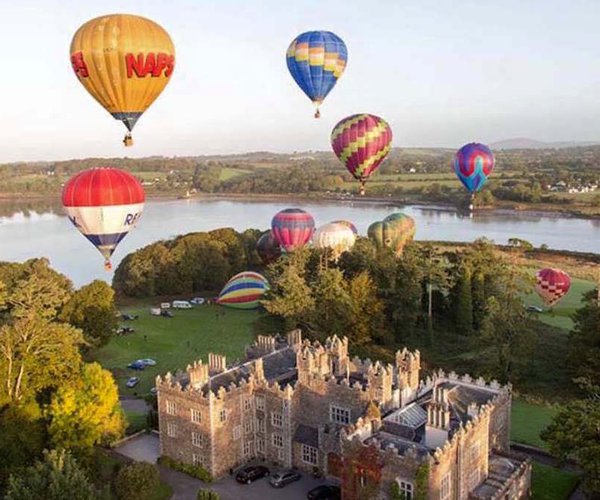 Heading south-east from Waterford on the main Waterford to Dunmore road (R683), just after the Waterford Regional Hospital, turn left into Island Lane, direction ferry crossing to the Island and Waterford Castle.

Waterford Castle Golf Club Resort is home to Ireland's only true "island" golf resort, detached from the mainland and accessed via a private ferry. In addition to being surrounded by the River Suir, the relatively open parkland golf course also contains an additional four internal water features which come into play on several holes. Substantial good quality bunkering also plays its part.

This Des Smyth and Declan Brannigan design includes several challenging dog-leg holes, not least the 456-yard par-4 12th, where distance as well as accuracy is required off the tee. With some lovely views from the course and a luxury hotel on-site, Waterford Castle is one of the best Stay&Play locations in the south of Ireland.

The Island, home to Waterford Castle Resort and Golf Club, was once home to a monastic settlement in the sixth and eighth centuries. Maurice Fitzgerald, cousin of the English Earl of Pembroke (known as "Strongbow"), landed in Waterford during the Norman invasion of Ireland in 1160. During a battle he was taken prisoner by Osserman of Waterford and held on the Island until he was rescued. Together with other Norman Lords, he was awarded large tracts of land in Ireland, including The Island, where he decided to make his home. For the next eight centuries, The Island was home to the the Earls of Kildare and Ormond and the Knights of Glin and Kerry, in one of the longest unbroken stewardship’s on record in Ireland. Eddie Kearns, who bought The Island in 1987, both preserved its past and secured its future by opening the Castle and the Island to visitors by developing the present luxury hotel and golf course.