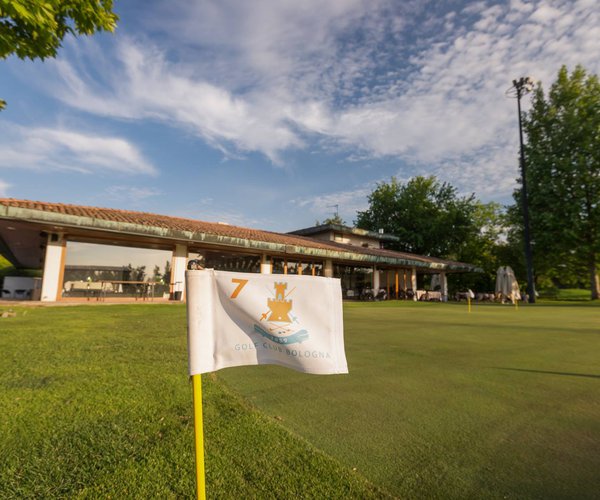 From the A1 Autostrada, just west of Bologna, take the Bologna-Casalecchio exit, and follow the SP569 (Via Nuovo Bazzanese) direction Vignola-Maranello. After approx 9 km, passing through Ponte Ronca, look for signs to golf club in Chiesa Nuova.

Golf Club Bologna: Not one of Italy's new, flashy layouts, nor overly long, Bologna is however a charming and classic parkland golf course. The layout has everything needed to test and probe all aspects of your golf game, while providing a wonderfully quiet and natural tour of this delightful rural countryside. From the clubhouse, perched up on a hill, you can survey the area's abundance of fruit-orchards and vineyards. Located about 15 km due west of Bologna's centre, the early slopes of the Apennines give the course its constantly undulating character, and provide vantage points for many picturesque views. Reflecting its surroundings, the layout combines a number of tree-lined stretches with others, particularly on the back-nine, that are more open. With generally good-width fairways, a complete absence of water (apart from a small non-threatening pond to hit over at the excellent 8th hole) and several relatively short par-4s, scoring well is a distinct possibility here. Bunkering is usually absent along the fairways, but poses more of a test around the seriously undulating, and often two-tier greens. After your tranquil stroll through this idyllic Italian countryside what better than to retire to the clubhouse for a tasty Spaghetti or Tagliatelle Bolognese - after all this is the ancestral home of the world's most popular meat sauce.
List of courses: Italy - North East

Nestling in the southern part of the vast Po Valley, the city of Bologna is the capital of Italy's Emilia-Romagna province. The Apennine Mountains, "the backbone of Italy", rise up just to the south of the city. Bologna is home to one of the oldest, if not the oldest, university in the Western world, "Alma Mater Studiorum", founded in 1088. The city's historic centre, contains a wealth of important Medieval, Renaissance, and Baroque artistic monuments and buildings, although it is also one of the most developed cities in Italy. Bologna is perhaps best known around the globe for its culinary traditions, not least its meat-based pasta sauce. Bolognese sauce ("sauce from Bologna") is known in Italy as ragù alla bolognese, and in the city itself just as ragù. Although Spaghetti Bolognese is one of the world's most popular dishes, the classic pasta of the Emilia-Romagna region is tagliatelle.