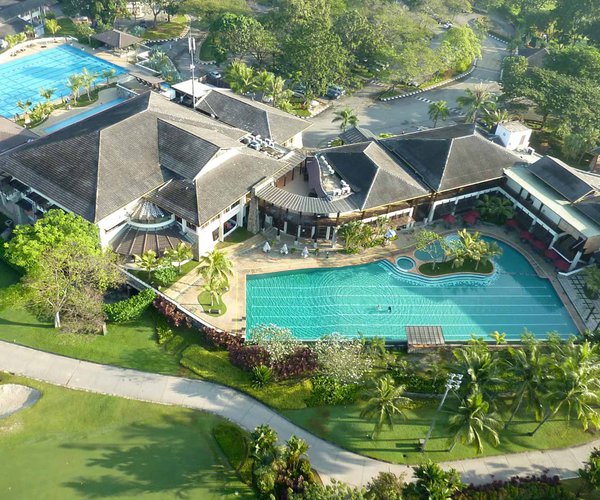 Kota Permai Golf & Country Club is located in the Malaysian state of Selangor, which encircles the capital Kuala Lumpur. Here you will find one of the country's best maintained and most handsome layouts.

Along with its attractive elevation changes, lightly tree-lined and contoured fairways, and fine array of water hazards, you'll also find many round railway-sleepered greenside bunkers. This bunkering creates a distinctive look to several holes, none more so than the signature par-4 2nd, where water dangerously flanks the left side of the fairway, then has to be crossed in front of the green. Two large sleepered bunkers look on from the back of the green, as if admiring this beautifully crafted golf hole.

Playing alongside small lakes and ponds will test your nerve throughout the front-nine (Hicom-nine), but the menace of water evaporates (to an extent) on the equally undulating back-nine (Gamuda-nine). At the long par-4 15th and short tight par-4 16th, water puts in a further telling appearance. These two testing holes are played on opposite sides of the same small lake. Care also needs to be taken with your drive at 18, with a pond lurking along the rightside of the fairway.

Kota Permai includes several stylish holes played from elevated tees back up to elevated greens. The relatively short par-5 12th and longer closing par-5 18th are two fine examples where downhill drives need to be followed by uphill approach play. Although there are plenty of good-size villas around the course perimeter, they never feel intrusive and don't really come into play, even for those occasional wayward shots.

In the Malay language, Kota Permai means "serene and beautiful"; aptly enough, Kota Permai G&CC has captivated the golfing fraternity with its undoubted charms since opening in 1998. Set within the township of Kota Kemuning, the Hicom Gamuda developed property continues to impress all who walk its fairways.

Kota Permai is owned by the property development company Gamuda Land, who also own the Horizon Hills golf and residential development in Johor.