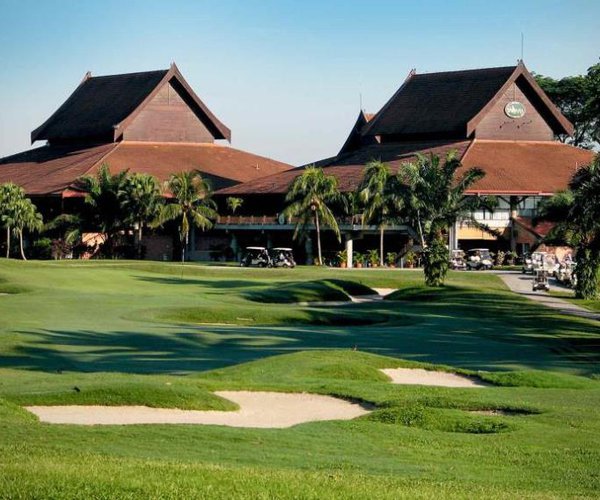 Above distances are for the Bunga Raya course. Also at Saujana is the 18-hole Palm course (par-72; 6992 yards).

From the New Klang Valley Expressway (NKVE), take the Subang exit. After toll plaza, take Jalan Subang north. After 2 km The Saujana is on your left.

Saujana Golf & Country Club (Bunga Raya course): Although Saujana's Palm course hosts the big professional tour events, the Bunga Raya course remains many people's favourite. Whereas the tour players get a slightly longer and (some might say) more forgiving layout to play on, the Bunga Raya is nicknamed the Crocodile because of its powerful bite. It's tighter and more undulating than the Palm, presenting a stern but enjoyable test for the handicap golfer.

Fream's Bunga Raya layout takes you across an old railway cutting and into a former palm oil plantation. Here the majority of the layout's holes roam across constantly undulating terrain. The relatively open parkland layout is bordered by lush jungle, although on the south side a high-density housing development also gets into the picture.

With a limited amount of water in play, except at the closing duo, Fream nonetheless ensures your short and long games are soundly tested. There's plenty of tight drives to make, while the greens are fast and sloping. If you miss them your ball can easily roll away down steep run-off areas, requiring delicate chips and pitches back to the putting surface.

Throughout, Fream serves up one well-crafted golf hole after another, always making good use of the elevation changes and predominantly natural setting. Among many memorable holes, the water-defended par-3 17th is a gem, while several par-4s are strewn with bunkers in the tee-shot landing areas. If you dare, a huge carry over water can be attempted at the closing par-4 18th.

Outside visitors welcome on weekdays; more restricted at weekends.

Compulsory for visitors to hire a golf cart and caddie.

Bunga Raya is the name of Malaysia's national flower, also known as the hibiscus. The railway cutting that you cross on two occasions, is part of a now disused railway system that was once used to transport palm oil and rubber from the neighbouring plantations.

The Saujana Resort was carved from a former palm oil plantation known as the Pilmore Estate. The name Saujana originates from an old Malay expression "sejauh di sana", meaning "as far as the eye can see". There's no better example of this than the view from the tee-box of the par-5 3rd on the Palm course.