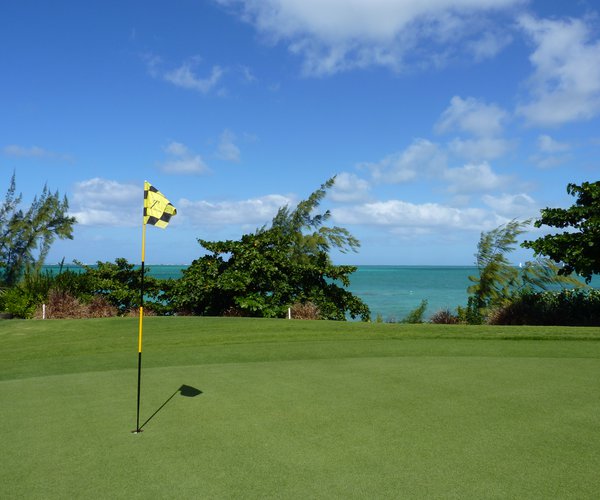 Ile aux Cerfs is reached by a ‘golfing special’ water taxi, which takes seven minutes to cross the lagoon from the resort. Arrival is on a jetty beside a large white sand spit on the lagoon side of the island.

Ile aux Cerfs Golf Club (formerly known as Le Touessrok Golf Course): The aerial views of Ile aux Cerfs, the most iconic golf course in Mauritius, stunningly portray "golfing on a paradise island". Reached via a short ferry ride across a lagoon, the course occupies its own beautiful island, Ile aux Cerfs (island of the deer). The deer have gone, but what has been created here has been described as a "wonder of the game". But don't think that Bernhard Langer's design is going to be an easy-going walk in the park.

The natural undulating terrain, including volcanic outcrops, lakes and gullies, and a variety of tropical trees and plants, have been crafted into a technically challenging layout, which big and wayward hitters may find constraining. At times the fairways can feel unnervingly tight. Some approach shots, as at the par-4 1st, will need to carry ornamental rock and shrub features. Accuracy is at a premium to hit some of the small, undulating and more elevated greens, which sometimes take on a pudding bowl appearance, as at the short par-3 8th. On holes like the doglegging par-5 9th, thin slivers of fairway are flanked by expanses of water, courtesy of several small lakes that weave past the holes.

The best of the occasional sea views arrive on the back-nine loop, especially as you skirt alongside the ocean's edge at the sharply doglegging par-5 11th and more gently doglegging par-4 12th. There is no rest for your course management and shot execution at the challenging final hole; an accurate and well judged tee-shot, will set up a testing approach to the sloping final green, spectacularly surrounded by a mangrove-swamp. A great finishing hole to this enjoyable, testing and at times idiosyncratic layout.

Ile aux Cerfs Golf Club was formerly part of the Le Touessrok resort, which is located on the Mauritius mainland on a beautiful stretch of white-sand coastline overlooking the tranquil Trou d'Eau Douce bay. At the resort you'll find the suites and rooms, pools, restaurants and bars, Givenchy Spa, tennis and the kids club. Accessed by private resort ferry boats are the resort's two islands - Ile aux Cerfs, with its Bernard Langer designed championship golf course, and Ilot Mangénie, an island retreat exclusive to guests.