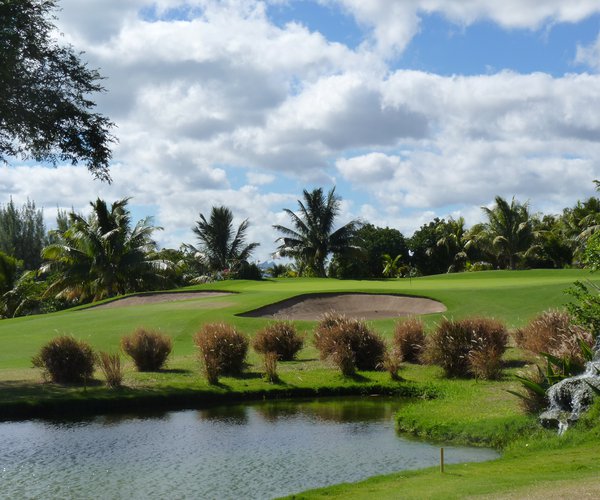 Paradis Hotel & Golf Club: This well presented and wonderfully scenic golf course occupies a special position on Le Morne Peninsula in the south-west of Mauritius. The front-nine scenery is dominated by a towering mountain, which rises vertically to over 500 metres, its craggy cliff faces looking down on this excellently crafted championship course.

The lightly palm-tree lined, never overly wide fairways are liberally defended by large, open bunkers that also make their presence felt around the small to medium-sized greens. Although one or two fairway-crossing water channels will need to be avoided on the front-nine, not least at the excellent risk-reward short par-4 8th, water poses its most serious threat on the back-nine. The par-4 12th and 13th holes are played alongside the wonderfully scenic mountain-ringed Black River Lagoon, while the signature par-5 16th and par-3 17th holes are bounded both by the lagoon and the azure-blue splendour of the Indian Ocean. The 16th curves around the edge of the lagoon, inviting you to bite off as much of the curve as you dare, while a challenging approach shot awaits to a smallish green, defended on two sides by water. Nicely elevated tees at the par-4 12th and 17th and a raised green at the par-5 7th create interesting topographical changes, although most of this tropical feeling layout is played on relatively flat terrain.

With its varied array of challenges and scenery, not least on the closing three holes of each nine, Paradis is one of the must play courses of Mauritius, in addition to being the island's first 18-hole championship layout.

Paradis was the first 18-hole championship golf course established on Mauritius; the first of an impressive array of courses that have made Mauritius a "must visit" golf destination for the well travelled golfer. | Two flagship Beachcomber hotels are located alongside (although barely visible from) the golf course: the Paradis Hotel & Golf Club and Dinarobin Hotel Golf & Spa (see details below).