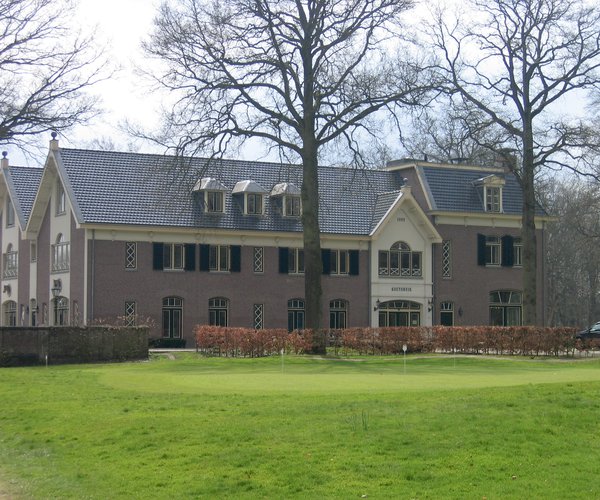 Golfclub Anderstein: The appearance of nine new holes in 2004, added to an original 18-hole layout dating from 1986, laid the foundations for a much better overall golfing challenge here at Anderstein.

Today's Vallei-nine (A) comprises nine of the original 18-holes holes, mainly laid out on flattish terrain ( ... with no real valley to speak of!). Water is a constant companion on these holes, taking the form of ditches and small lakes, and requiring plenty of straight hitting from the tee.

The Heuvelrug-nine (B) and Heide-nine (C) both comprise a mix of some holes from the original course (mainly tight and wooded) and several much more open holes crafted during the 2004 expansion. These new holes were equally shared between the B and C nines, and arguably represent the best section of the 27-hole layout. Their greens, aprons and fairways were a substantial improvement over those of the "old" course.

MOST MEMORABLE HOLE: the par-5 7th on the B-course, shows how the old and new parts of the revised layout were melded together. From the tee-box to 200 metres out, you play the "new" half of this hole, with water threatening anything hit too far right from the tee. From midway to the green a reworking of an "old" hole takes over, with its tree-lined dog-leg leading you into the green.

Visitors welcome on weekdays and Saturdays; no visitors on Sundays.

The "Utrechtse Heuvelrug" is a ridge of low sandhills that runs between the cities of Utrecht and Amersfoort, extending several kilometres to the north-west and south-east. Anderstein lies on the east edge of this tract of sandy terrain. The names of the three nines at Anderstein translate as follows: Heuvelrug (hilly ridge); Heide (grass pasture); Vallei (valley).

Also to be found in the Utrechtse Heuvelrug area, are other renowned Dutch inland courses, including Hilversumsche to the north, Lage Vuursche, the mighty Utrechtse "De Pan" and Hoge Kleij.