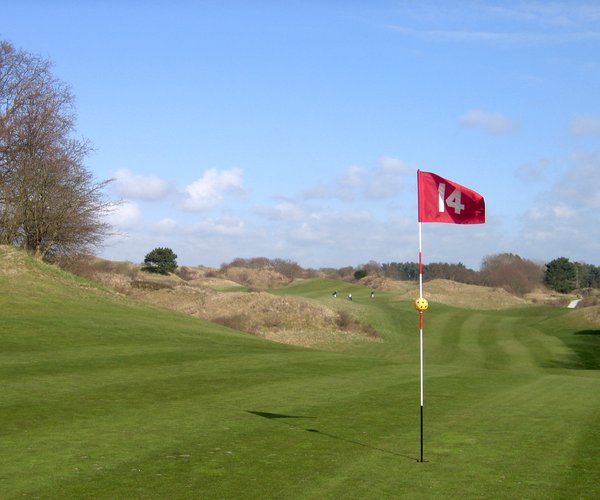 Noordwijkse Golfclub: It is difficult to imagine a more revered links golf course in continental Europe than is found here amongst the dunes at Noordwijk. Maybe Harry Colt's original layout, which lay five kilometres to the south, was of equal stature. But that course was abandoned after World War II in favour of constructing the current course. Frank Pennink supervised the construction of the 'new' layout, to a design largely developed by the club's members, led by Mr P. De Jong.

Set back from and just out of sight of the sea, most of the Noordwijk course occupies a stunning set of towering sand dunes. The layout weaves its way between the sand hills, demanding accurate shot-making from the tee, and again around the well-bunker defended greens. The middle part of the front-nine takes you on a brief excursion through the corner of a pine forest. The pines may provide a brief respite from the elements, but don't count on any trees for shelter on the back nine - just a succession of majestic and demanding links holes, laid out in open duneland.

One of several knee-trembling (blind) carries you'll need to make comes with the second shot over a saddle-back hill at the par-5 2nd. Additional blind shots also feature from one or two of the tees. A word of caution about attempting to play from the ever-lengthening back tees. Don't, unless you are a low single-figure handicapper, or better! If the wind is blowing or your game is out of sorts, Noordwijk can be a brute.

Nothing intrudes on the naturalness of the surroundings here. Roads and housing are left far behind as you head through the pine forest and connect with the duneland and golf course. Not just one of the finest golf courses in the Netherlands, Noordwijk ranks alongside some of the world's very best links golf courses.

Noordwijkse Golf Club has hosted the Dutch Open Championship on many occasions, starting in 1916 when a Major Charles Bryce won the trophy; he was one of a number of British Army officers interned in the Netherlands at the time. Since those early days, Noordwijk has produced an impressively international list of Dutch Open champions, including Bernhard Langer (Ger), Graham Marsh and Stephen Leaney (Aus), Bob Byman and Payne Stewart (USA), Seve Ballesteros (Esp) and Colin Montgomerie (Scot). For more details view Top Golf Tournament at Noordwijkse Golfclub.