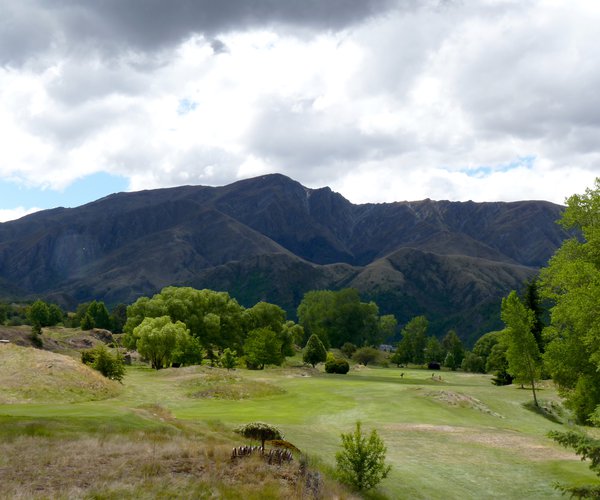 Arrowtown Golf Club: In this former gold-mining area, now renowned for its rich vein of glittering championship courses (Millbrook, The Hills and Jack's Point to name but three) Arrowtown Golf Club is a true nugget. Set in rolling hills on the outskirts of town, this challenging and thoroughly absorbing layout occupies rugged, moorland-style terrain. With ever-present views of the Remarkables and Coronet Peak mountain ranges, you will need your A-game to hit the tight slivers of fairway. Flanked (and at times invaded) by rocky outcrops, occasional water hazards and an occasional light scattering of trees, the bunkerless holes are arranged in two nine-hole loops on either side of Centennial Avenue. Each hole has its attractions and several their own idiosyncrasies, constantly placing a premium on accurate ball-striking. At a relatively short 5400 metres, prodigious length is not the best prospect to scoring well here, although it may short-cut you to the greens on some of the front-nine's short par-4s. Arrowtown's link with its goldmining past is highlighted on the back-nine, which runs closest to the once goldbearing Arrow River. A historic stone ruin (Shanahan's Cottage, c.1874) nestles alongside the par-4 11th, while the par-4 15th (Golden Arrow) and postage-stamp par-3 16th (Sons of Fortune) are part of a back-nine which gives a tad more space to work the ball than the more undulating, tighter and rockier front-nine. Some may find it a tad quirky, at times even unfair, but if you can't enjoy a round of golf at Arrowtown, then its probably time to put the clubs away and give up the game !
List of courses: NZ - South Island

Worth checking ahead to ensure tee-time availability, especially at weekends.

The former gold mining town of Arrowtown is a living, historic holiday destination. Spectacular scenery, four very distinct seasons and a tranquil atmosphere attract visitors from New Zealand and around the world. Well worth exploring this charming, vibrant and wonderfully scenic location.