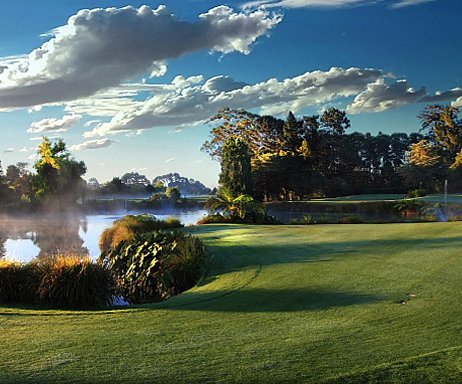 Royal Auckland & Grange Golf Club (aka "Middlemore"): Once separated by a creek (a tributary of the Tamaki River), the historic golf clubs of Royal Auckland and Grange initiated a bold merger in 2017. From their combined 36 holes, a new 27-hole course will emerge, with 13 holes on the Grange side of the creek, and 14 on the Royal Auckland side. Two bridges and a new clubhouse will sit between the two sections of the newly merged club, with the Nicklaus Design 27-hole layout due for completion in 2021 (play will continue during the redesign project).

The pre-merger Royal Auckland layout is an outstanding example of a gently undulating, tree-lined, parkland golf course. It was granted its "Royal" prefix in 2010, and remains one of the most private clubs in Auckland.

The immaculate fairways, on which you will be hard pressed to find a single weed, are lined with a splendid variety of trees, large and small. These same fairways are generally wide enough to invite use of the driver from the tee, provided you hit reasonably straight. As is the case at the neighbouring Grange Golf Club, the terrain here is gently undulating and gives plenty of character to the well-crafted holes. The par-3 7th, played from tee-to-green across water, is one of the most memorable. The start of the back-nine, with a short and heavily bunkered par-3, and two short par-4s, is where the best birdie opportunities occur. Elsewhere, and especially if playing from the back tees, you'll need to work for those pars and birdies, and beware the hidden dips in front of several greens. The good-sized and reasonably fast-paced putting surfaces will thoroughly test your skills with the "short stick."

Legendary golfer and course architect Peter Thompson has made several enhancements to the course since the 1970s. His changes have ensured Middlemore continues to provide an excellent golfing challenge, as well as a thoroughly enjoyable walk in an immaculately presented parkland oasis. Always a Royal by nature, since 2010 a Royal by name as well.

Royal Auckland & Grange GC is a private club. Outside visitor play is restricted. Overseas visitors should contact the Secretary to determine playing possibilities.

Royal Auckland & Grange is one of two golf clubs in New Zealand honoured by exercise of the Sovereign's royal prerogative. Queen Elizabeth II conferred the Royal titles on Wellington Golf Club in 2004 and Auckland Golf Club in 2010.