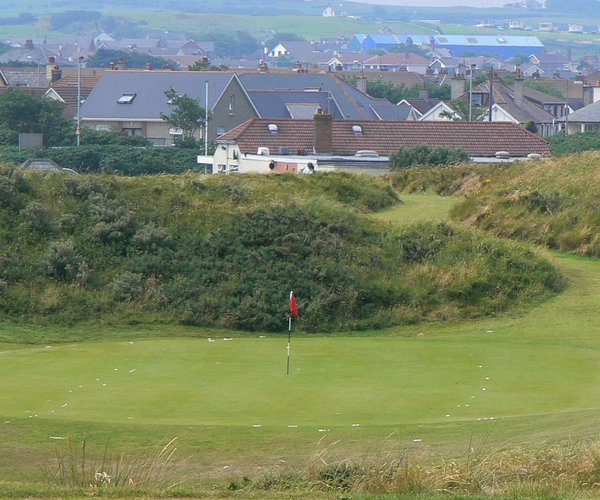 From Coleraine take the A29 direction Portrush. After 5 miles, upon entering Portrush, turn right onto the A2 direction Bushmills. After o.4 miles golf entrance is on your left (approx o.3 miles before the entrance to Royal Portush Dunluce course).

Royal Portrush Golf Club (Valley Course): Royal Portrush's Valley Links is certainly worth a visit in its own right, even if it is "looked down on" by its more revered big brother, the Dunluce Links. Most of the course is played in a relatively flattish valley, between the bigger dunes of the Dunluce course and a single line of immense dunes, behind which hides the sea.

The family resemblance between the two links courses, Dunluce and Valley, is clear. Both are laid out on excellent quality natural links land, where crisp turf carpets the rolling fairways. Around the greens, slick run-offs and strategically-placed and mischievous pot bunkers play their part. Surprisingly the course is home to only 22 bunkers, although the threat they pose would suggest a much larger number.

The Valley may be a tad shorter than the Dunluce, but be assured, your full game will be thoroughly tested. Four exquisite short par-3s, including the 3rd hole (Fairy Ring), are countered by the very testing 237-yard par-3 6th (Curran's Point). The Valley's Championship tees provide a par-70 course that stretches to 6,304 yards, with an SSS of 71. The shorter Medal tees give 6,054 yards, with a par of 68 and SSS 70.

The Valley should not be considered a mere warm-up for the Dunluce. This is a great little links course that stands on its own two feet, quite independent of big brother.

Royal Portrush's Valley Links is used each year as a final qualifying course for the North of Ireland Amateur Championship.